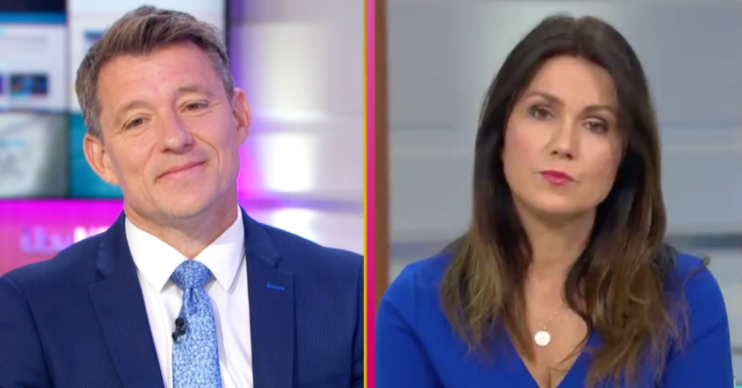 The Good Morning Britain host is filling in for Piers Morgan

“Back to therapeutic Thursdays Ben Shephard,” she said in the absence of her usual co-host Piers Morgan.

“Did you have a sneaky trip to the barber?”

Ben then replied: “My clandestine underground barbers… Mrs S went at me with the clippers yesterday.

“Actually I had a go myself and took a bit of a hole out of one side so she evened it up.”

Susanna then jokingly pointed out that Ben had a few more noticeable grey hairs on show.

“It’s looking very good,” she quipped. “It also looks like you’ve had highlights.

“How comes you’re able to carry that off but when it happens to me I have to get the root touch-up out?

“It’s not to my personal liking but I like it on you!”

Ben then looked a little uncomfortable as all attention was on his new silver strands.

At that moment, the camera then zoomed right in for a close up of Ben’s hair – which he wasn’t happy about at all.

“Crikey,” he snapped at the camera operator, realising how close the lens was to his hair. “Steady on!

“I’m not sure you need a close-up of Ben’s grey bits.”

Ben is filling in for Piers today and tomorrow on Good Morning Britain.

However, Piers’ absence has nothing to do with the complaints.

The presenter hosts the show from Monday to Wednesday.

During the coronavirus pandemic, he began hosting the show on Thursdays too but as lockdown measures ease, he is apparently now back to his usual schedule.