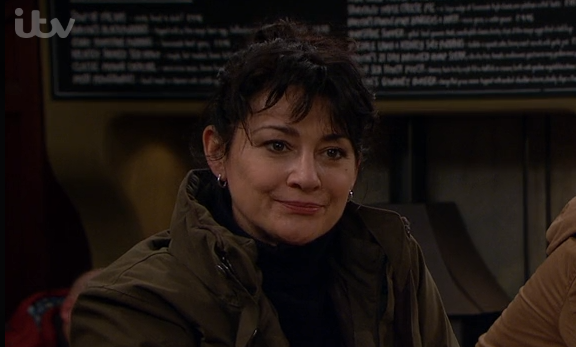 Emmerdale fans glad to see Moira return and back to herself

Moira came back with a bang!

Fans of Emmerdale were glad to see Moira Dingle return to the village last night and she appeared to be back to her normal self.

A couple of weeks ago, Moira decided to go to stay with Nana Barton to give herself a break away from everything and to stop relying on alcohol for comfort.

In last night’s episode (Wednesday February 12 2020), Matty and Amy found themselves caught up in a difficult situation as they were chased by rustlers, who were stealing sheep from Butlers farm.

Luckily Moira came back just in time and scared the rustlers away with a gun.

Although Matty still wasn’t happy with his mum and refused to be put through anymore stress, she managed to convince him she had changed.

Viewers were glad to see Moira back to her usual self. 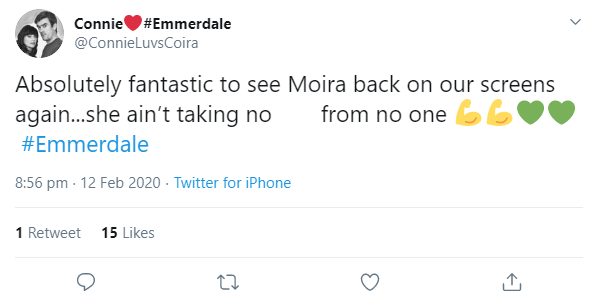 Tonight’s Moira, is the Moira I love to see 🤩💚 #emmerdale 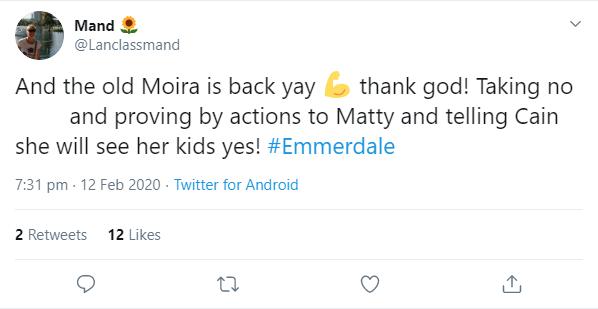 Moira also made her return well known and told her husband Cain, who she is separated from, that she plans on seeing her son Isaac and stepson Kyle.

Last year, Moira had an affair with farmhand Nate Robinson.

When Cain found out the truth, Nate revealed to Cain that he’s actually his son, and he planned to ruin his life as revenge for abandoning him.

But Cain had no idea his ex-girlfriend Cara was even pregnant and Nate realised he made a terrible mistake.

Tonight’s Moira is the Moira I love to see.

Moira struggled to accept her marriage to Cain was over and turned to alcohol to cope.

But her son Matty became fed up of her behaviour and moved out. Meanwhile her nephew Pete was also sick of how she was acting and ended up leaving Butlers farm to work at Wylies farm with Nate.

Read More: Emmerdale’s Gemma Oaten has been left devastated by her grandmother’s death

After it seemed everyone had turned their back on her, Moira decided to leave the village to stay with Nana Barton.

It seems she managed to get her head straight in that time. But now Moira is back, will she be able to prove she’s changed?

Are you glad Moira’s back in the village? Leave us a comment on our Facebook page @EntertainmentDailyFix and let us know what you think!