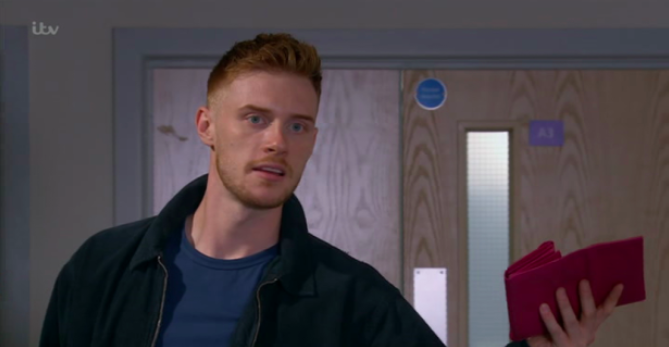 Max Parker has given Emmerdale fans a taste of what’s under his chef’s overalls and some of them had to roll their tongues back in.

The actor, who plays Victoria Sugden’s love interest Luke Posner, showed off his six-pack on his official Instagram page this week – and fans gushed over his “hot” body.

Fitness fanatic Max posted a topless shot from the locker room of his gym, and told fans his physique was partly due to a new change in his diet.

In the snap, Max, who has just turned 28, is wearing a pair of black gym pants, and not much else!

Unsurprisingly, many of his 7160 followers responded with complimentary messages, with one saying: “Heaven on earth.”

Many others let their emojis do the talking by posting the sign for flaming hot.

Max joined the ITV soap last year as a mystery man who befriended pregnant Vic while she was in the hospital having check ups.

It was soon revealed that he was related to Vic‘s rapist Lee Posner – he’s his brother.

Despite this, Victoria and Luke have become increasingly close – and next week the pair kiss.

On Thursday (February 6), Victoria made a big decision after giving Luke a hand during his first day on the job as new chef in The Woolpack.

After the pair came close to kissing during a highly-charged moment, Vic decided to accept his offer of going to the circus with him the following day, in what appears to be a date.

Something tells us Aaron will be furious when he returns to the village, but Wendy will jump at the chance to get one step closer to her grandson…

Do you approve of a love match between Victoria and Luke? Leave us a comment on our Facebook page @EntertainmentDailyFix and let us know what you think!