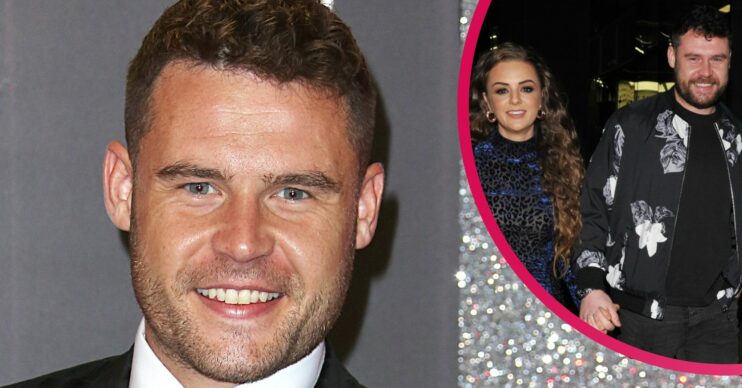 The Aaron Dingle actor and I'm A Celebrity winner has a lot going on!

Danny Miller has opened up about his son’s struggles with colic and reflux and told how he worries he’s to blame.

The I’m A Celebrity winner shares Albert, three months, with his fiancée, Steph Jones and the couple got engaged in January 2021.

Speaking to OK! magazine, Danny said Albert’s diagnosis had been upsetting for them to watch.

Albert suffers with Reflux and Colic

“One minute he’s fine and the next he’s really sick. I feel so helpless,” Danny revealed.

“It’s just upsetting and horrible to watch and you worry if he’s had enough to eat.

“But he’s a very happy baby and putting on weight, which is the main thing.”

Danny went on to add his fears he’s to blame for Albert’s reflux.

“I worry it’s something I’ve given to him as I suffer really badly with heartburn and reflux – as people may have seen in the castle!”

Reflux is in fact very common in babies. It’s where they bring up milk or are sick shortly after feeding.

The condition usually gets better on its own, but sometimes medication is needed.

When was Danny’s son born?

Albert was born on October 25 2021, weeks before Danny entered the I’m A Celebrity castle.

Some fans of the show trolled Danny over his decision to leave his son when he was less than a month old.

“Is Danny Miller that desperate for five minutes of fame and a wad of cash that he’s leaving his newborn baby at home?” said one.

“I’m baffled at why anyone would make that decision,” they added.

However fans of Danny leapt to his defence. And Danny also hit back insisting Albert was in the best hands and he was doing it for his son.

In fact, he has also revealed spending time with his son was a key reason for his departure from Emmerdale last year.

Why did Danny Miller quit Emmerdale?

He played the role of Aaron Dingle for 13 years on and off but announced he had quit the soap shortly before entering the castle.

Speaking on a roundtable interview, he said: “When you’re in a contract with a fantastic show like Emmerdale, you’re at the hands of the storylines, and the writers.

“That’s something I wanted to free them of and free myself of so I could pick and choose and be there with the baby.”

Ultimately Danny has said he wants to be there for his newborn son Albert.

And starring in Emmerdale won’t allow him the time to do that.

“Our lives are run by block schedules and life goes really quickly on a soap,” he added.

“We work Monday to Friday, 7am until 7pm so for me, having a new baby and a lot of people on the cast know, it’s very difficult to spend much time with them.”

“And for me it was a decision to be in the best position possible.”

And it turned out to be the the right decision because he was eventually crowned the winner of I’m A Celebrity.

He managed to fend off Coronation Street legend Simon Gregson, who finished second, and Frankie Bridge, to win the crown.

Following his victory, Danny said: “I can’t believe it. I’m speechless for once.

“Thank you so much, this is the best thing that’s ever happened to me bar my son.”.

Danny is engaged to Steph after his romantic proposal in 2021.

The couple are planning their big day and Danny revealed in the OK interview that he’s taken the reigns.

They are getting married over the course of a few days so they can have a relaxed day.

And former co-star Adam Thomas is one of Danny’s ushers!

Despite Albert still being young, Danny told the publication: “If it happens and they’re born within 12 months of each other then that would be great, or if it’s a couple of years later then we’d be happy either way.”