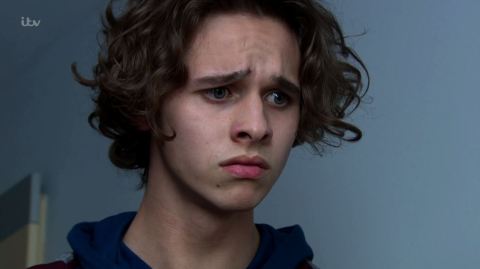 Jacob Gallagher is in a sorry state after being abandoned by his teacher Maya Stepney – the woman who has been grooming him for months, but who he thinks he loves.

The pair were hiding out in a secret hotel before going on the run together, until she disappeared from the room, leaving Jacob alone and confused.

Forced to return to Emmerdale with his tail between his legs, the 16-year-old struggled to come to terms with what has happened to him.

Last night (May 16), fans of the ITV soap were shocked when the teenager took out his frustrations on those around him – even becoming violent towards his poor grandad Eric Pollard!

While some have sympathy for Jacob, other viewers turned against him as his behaviour became volatile.

Back at home, Jacob was seen obsessively checking his phone for messages from missing Maya, until a worried David put his foot in it and caused an angry Jacob to storm out.

But, in doing so, the teenager pushed injured Eric against the shelves!

Many viewers were simply horrified at Jacob for his actions, and others blamed the real culprit – Maya.

Damn Jacob, you had to shove Eric like that 😡. #Emmerdale

What a vile lad Jacob is #emmerdale

One said: “Can’t stand the angry state Maya has left Jacob in.”

Another wrote: “Damn Jacob, you had to shove Eric like that?”

A third added: “It’s really peeing me off, everyone blaming Eric and Jacob pushing him what an absolute outrage. #Emmerdale.”

Others called Jacob’s behaviour “rude”, “vile”, “thick” and much worse.

Some viewers have begged David to call the police and report Maya, while others want Jacob’s ‘mum’ Alicia to return.

In upcoming scenes, David will install spying software on Jacob’s laptop in an attempt to catch Maya. And it works a treat as she is arrested in dramatic scenes next week.

But that’s not the end of Jacob and Maya, as the lovesick schoolboy vows to stand by her.

Do you have sympathy for Jacob or think there’s no excuse to be violent? Leave us a comment on our Facebook page @EntertainmentDailyFix and let us know what you think!