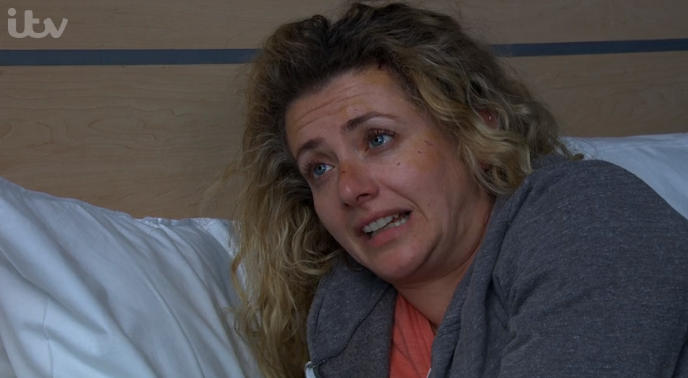 As the Maya Stepney plot drags on and on in Emmerdale viewers are getting frustrated that no one has called the police to report her grooming of Jacob Gallagher.

Jacob and Maya have been holed up in a hotel since the whole truth came out during the Big Night Out episodes, but even though several people now know what’s been going on, no one has actually gone to the cops.

Firstly, Liv Flaherty discovered the truth and instead of getting the authorities involved, she blackmailed Jacob and Maya to get money for Aaron and Robert’s surrogacy plans.

Perhaps she could be forgiven as she’s only a child herself, but then Priya Kotecha, Tracy Metcalfe and Jacob’s own mum, Leyla Harding found out and instead of calling in the authorities they confronted Maya with Leyla left thinking she’d killed her.

Once it was revealed Maya was still alive and Jacob had been living with her in a hotel and David then discovered what was going on, fans were sure the police would be involved.

David is Jake’s stepdad after all, the one he lives with and the one responsible for bringing Maya into their lives.

But alas, David has also failed to call the police in – fearful Jake will never forgive him and wanting to play the long game to get his son back.

It was David’s dad, Eric Pollard, who said what everyone else has been thinking: “What did the police say?” he asked when David told him everything.

As David confessed he hadn’t told them, Eric responded: “Are you insane?”

David went on to explain Jacob had agreed to meet him later and if he got the police involved Jacob would never trust him again, but Eric responded that Maya could take him out of the country and David would never seen Jakey again. Another good point, Eric.

Fans at home couldn’t have agreed more, insisting Eric was the only one talking any sense – with one even saying they were going to call the police just to get the storyline to end.

Enough is a enough now David, call the police. The longer he is with her the more messed up he is gonna be, especially if she keeps playing games with him like this! #Emmerdale

David you should of phoned the police when you first heard the news ffs #Emmerdale pic.twitter.com/gGkoH5q1Rk

David’s driving me mad in @emmerdale surely your phone to#he first thing you would do is phone the police. #Emmerdale

Eric the only one in that family with any brains. 🗣🗣Call the Police David ffs!! #emmerdale pic.twitter.com/uzXpRaU2U4

The police would of found Maya by now if they’d called them. They need to stop pretending they can deal with it alone! #Emmerdale

Read more: Emmerdale confirms returning character who could be vital in Maya’s arrest

Fortunately, we now know Maya will be arrested next week after a confrontation with David.

But Matthew Wolfenden, who plays David, has revealed the plot is far from over as Jacob stands by Maya and insists he is in love with her.

Do you think they should have called the police on Maya? Leave us a comment on our Facebook page @EntertainmentDailyFix and let us know what you think!