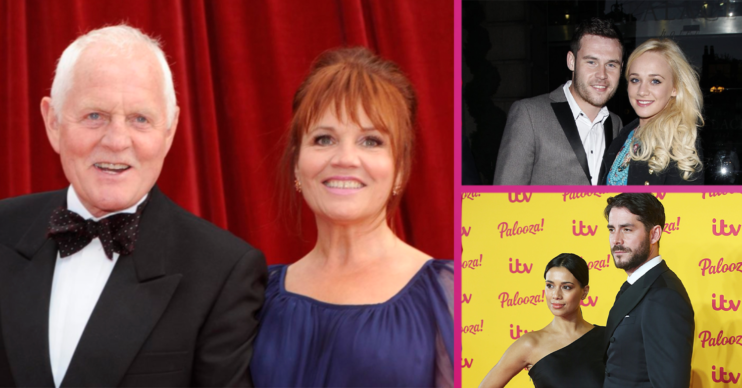 Emmerdale seems to have brought many couples together!

Over the years, Emmerdale has seen many romances on screen, but the soap has spawned some couples in real life too.

Here’s a look at the stars of the ITV show who fell in love – some fleetingly, some hopefully forever!

Jeff joined the ITV soap back in 2000 as Cain arrived for his cousin, Butch’s, funeral.

The following year, Zoe joined the Emmerdale cast as vet Rhona Goskirk. While she appeared on and off on the soap in 2001 and 2002, she began going out with her co-star Jeff and the couple married in 2003.

Together Jeff and Zoe have two children Stan and Violet as well as two dogs Rita and Ronald.

As well as working and living together, the two also grow their own fruit and veg in their allotment.

Chris joined the show in 1986 making Eric the longest-serving character in Emmerdale.

Lesley joined Emmerdale in 2008 as Brenda.

In an interview with the Daily Record in 2012, Chris spoke about he and Lesley met. He revealed: “It was weird. Somehow we’d never met before and we just kept bumping into each other at work.

“I can’t even remember if I asked her on a date or she asked me but she is wonderful and we’re very happy.”

The couple tied the knot in 2016 in a ceremony in Cornwall.

Whilst the couple don’t have any children together, Chris has two children with his ex-wife Caroline Hunt. And Lesley has two daughters with her ex-partner Christopher Guard.

Charley joined Emmerdale in 2002 when she was 14 years old. Matthew joined four years later and in 2007, the two started dating.

They became engaged in 2009 and Charley gave birth to their first son Buster the following year. In 2013, the couple appeared to split however they did get back together.

The couple married in a surprise ceremony in 2018.

Mark played Daz on and off from 2014 until 2019. However he left the show last year, after he allegedly assaulted an OAP.

But Mark was found not guilty of affray, unlawful wounding and assault by beating after he bit Andrew Potts.

In amongst their tough time, Laura and Mark did get engaged last year.

Whilst Laura has no children of her own, Mark has two kids with his ex-wife and actress, Siobhan Finneran.

The latest romance to come out of Emmerdale is Natalie and Jonny. Natalie joined the show in 2009, meanwhile Jonny made his first appearance in 2014.

After making a handful of appearances between 2014 and 2017, he joined the show as a regular character in 2018.

Rumours of their relationship began earlier this year when the two were spotted together in a zoom call during the coronavirus lockdown.

In a very recent interview on Loose Women, Natalie revealed the two become close after doing a charity event together and began dating.

They then decided to stay together as the country went into lockdown.

Actress Fiona has played Priya Sharma in Emmerdale since 2011, taking over the role from former actress Effie Woods.

Simon appeared in the ITV soap for a few episodes in 2017 playing Home Farm client Hugh.

Fiona and Simon married last year in a ceremony attended by some of their co-stars.

Whilst the couple have not revealed when they will have children, Fiona revealed she “can’t wait” to start a family with her husband.

Whilst the two actors both had roles on Emmerdale, they were on the show at different times.

Meanwhile, Chelsea joined the show the following year as Amy Wyatt. Chelsea left the show in 2013 and the character has since been recast with Natalie Ann Jamieson taking over the role.

It appears the two began dating last year, however it seems they may have known each other before, as Chelsea shared a photo of James in 2018.

Whilst Emmerdale have brought together many people over the years. Some relationships didn’t seem to last.

Whilst Kirsty is famous for her role as Leela Lomax in Hollyoaks, she previously played Roz in Emmerdale on and off from 2010 until 2012.

Meanwhile Danny has played Aaron on and off since 2008.

Whilst there was reports of cheating, the reason for their split wasn’t confirmed.

Very proud of this little sparrow who is walking up an average sized hill (Mount Everest) all in the name for charity. @steveprescott1 Had a great night at his fundraiser. A great night for an amazing cause @mikeparr226

Read More: Emmerdale star Alexander Lincoln scared he’d be told off over haircut on first day back at work

Isabel joined the soap in 2006 as Victoria, meanwhile Michael joined as Ross in 2013.

Whilst there aren’t a huge amount of details out there about Isabel and Michael’s relationship (because they both seemed to like to keep things private), it appears they were together for roughly three years.

Mike left Emmerdale in 2018 and moved out to America. Meanwhile Isabel is still on the show.