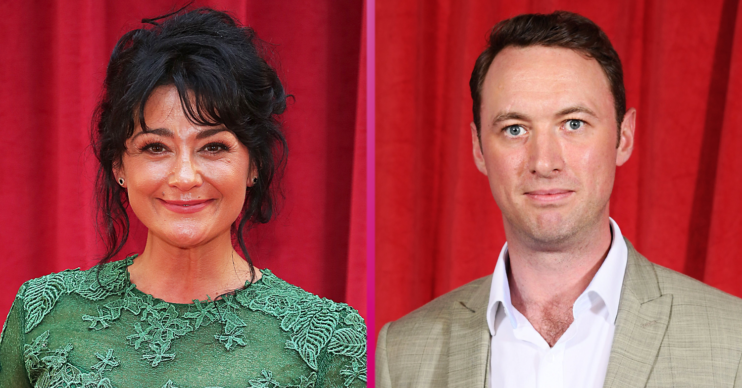 Jonny and Natalie have worked together for years

Emmerdale star Natalie J Robb, who plays Moira Dingle, has revealed all the details on her romance with co-star Jonny McPherson.

The actress appeared on Loose Women today (Wednesday, July 15) to talk about her current storyline in Emmerdale, which has seen her alter ego involved in a hit and run.

However, whilst on the show, Natalie opened up about her real-life romance with Jonny, who plays Dr Liam Cavanagh in the soap.

She revealed they had worked together for years but didn’t start dating until this year in January.

She said: J”onny McPherson and I started to see each other, our first date was in mid-January and then we were just having a couple of dates in February and then obviously in March lockdown happened.

“And we were together at the time Boris Johnson announced it so we were like ‘oh’. He’s kind of been staying with me and then they were saying ‘yes it could be three weeks, yes it might be six weeks’ and I was like ‘oh okay’.

She revealed their relationship ‘evolved’ from a charity event for children with cancer, where they went to Lapland for the day. The actress said after the event they got to know each other more.

In a cheeky comment about being in lockdown together, Natalie added: “Well we’ve had a few wobbles I’m not going to lie but the making up was fantastic.”

Last month, rumours sparked that Natalie and Jonny were dating during a video call celebration for their co-star, Liam Fox’s 50th birthday.

In a picture shared on Twitter, the Emmerdale cast and crew gathered to wish Liam a Happy Birthday.

In the picture Natalie and Jonny could be seen together. As this was during the coronavirus lockdown, it became apparent the two were isolating together.

Emmerdale: What’s next for Moira?

Currently Moira is in a induced coma after being involved in a hit and run.

Her ex-husband Cain has remained by her side, however villagers still have no idea who is behind what happened.

Before being hit, Moira just discovered her friend Harriet was cheating on her fiance Will with dodgy DI Malone.

As Malone has been terrorising Cain for months and has proved to be ruthless, he is the number one suspect.

However what Moira’s family don’t know is that Jamie is the one who hit Moira.

But later in the week his wife Andrea will use this to her advantage and threaten to go to the police if Jamie ever leaves her.

Did you isolate with your new partner during the pandemic? Leave us a comment on our Facebook page @EntertainmentDailyFix and let us know what you think of this story.