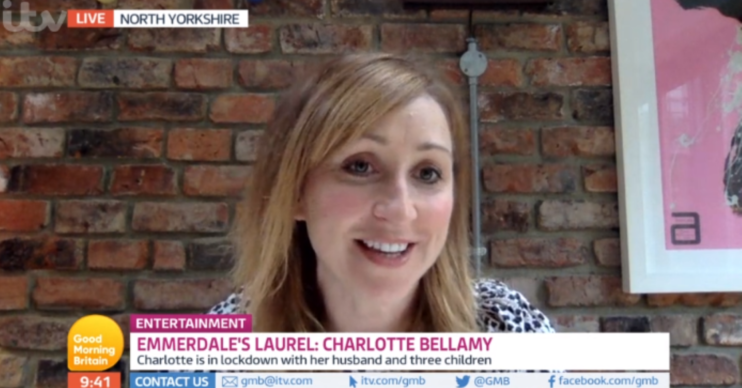 Emmerdale star Charlotte Bellamy has said the show may have to make a ‘disastrous’ change when they all return to filming.

Charlotte, who plays Laurel Thomas on the soap, appeared on Good Morning Britain today (Monday, May 11) to talk about her current storyline with Arthur’s bullying.

As she spoke to Lorraine Kelly, the topic of filming came up and Charlotte revealed a big change which could take place when it returns.

She said: “I’m not sure when we’re going back. We’ll just have to wait and see. I know that they’ve been planning, working out how we’re going to do it.

“As you know a set is a very small space with lots of people. What I do know is it’s going to be a very different way of working.”

She continued: “I’m sure we’ll have to do our own hair and make up which could be a disaster. But, you know, we’ll make it work whatever.”

Currently, Laurel has been dealing with her son Arthur, who began bullying Archie Breckle last year.

Arthur confessed to his cruel behaviour after the death of his grandfather Sandy, but last week things took an explosive turn.

At Rishi’s birthday camping trip, Arthur tried to get Archie to light the fire in order to land him in trouble. But as Arthur lit the fire, it got out of hand and flames and moved towards a tent, where little Dotty was sleeping.

Speaking to Lorraine, Charlotte talked about Arthur’s anger, which is getting out of hand.

She said: “I know and Arthur is just spiralling out of control like you said. I mean, what a nightmare. He’s just a very angry boy and so annoyed that he’s in this new blended family with Jai and Archie.”

But Charlotte was also quick to praise her young co-star Alfie Clarke, who plays Archie, for his professionalism on set.

“Yeah he’s amazing and he’s been in the show actually since he was two and a half and he’s now nearly 13. He’s just a great little actor to work with.”

She added: “He’s a joy to be with and got an amazing set behaviour. When he’s on set he doesn’t talk, knows his lines and so I’m blessed actually.”

What’s next for Arthur and Alfie?

When the adults return to the camp, they notice the fire and Laurel leaps into action to save her daughter.

Despite Arthur’s excuses, Archie tells his family what happened with the fire.

Laurel knows she has to act and calls the police asking them to teach Arthur a lesson. But will it work?

Next week Emmerdale is on Monday, Wednesday and Friday at 7pm on ITV.