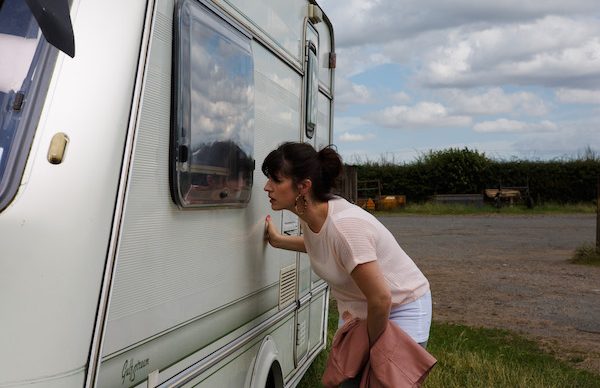 The truth is out!

Nate Robinson and Moira Dingle’s forbidden affair is uncovered by Kerry Wyatt in next week’s Emmerdale… but how long will it be before she tells Amy Wyatt and Cain Dingle about her discovery?

Moira and Nate have been giving each other lustful looks across the hay bales for weeks, and recently they finally gave into temptation.

But despite Moira struggling to fight her feelings for the hunky farm hand, it seems the pair just can’t keep their hands off each other and soon they’re sneaking secret moments together in Nate’s caravan while they think no one is looking.

Unfortunately for the forbidden pair they’re not being as sneaky as they think because they get caught out next week by Kerry… the one person in Emmerdale you definitely don’t want knowing your darkest secrets.

Kerry’s discovery comes after she tries to make Amy see that Nate isn’t going to keep the secret that they started the factory fire that killed Frank Clayton.

The mother and daughter duo caused the fire by breaking into the building to cover their tracks after stealing charity money.

Kerry’s adamant that Amy’s made a huge mistake telling boyfriend Nate their secret, and Amy wonders if her mum is right when she catches Nate deep in conversation with Tracy.

Jumping to the conclusion that he is telling Tracy about how the factory fire really started, Amy lays into Nate about betraying her trust.

But it seems she has got the wrong end of the stick when Nate turns on Amy and tells her that instead of telling Tracy the truth, he was actually covering for her.

Amy feels awful for doubting Nate and he is upset that she clearly doesn’t trust him and storms off.

But while Amy is left feeling guilty, little does she know he has gone straight to find Moira.

Amy tells her mum what has happened and Kerry is determined to have it out with Nate, annoyed with him for upsetting Amy once again.

But when she gets to his caravan to confront him, she is shocked to find him locked inside getting steamy with Moira!

Stunned to see the pair together, Kerry’s now armed with some seriously good information that she can use against Nate if she needs to.

Will she confront the pair, or will she use her discovery to her own advantage?

And what about Amy and Cain? Surely with motormouth Kerry knowing about the affair, surely it’s only a matter of time before they find out the truth…

Do you think Kerry will confront Moira and Nate? Leave us a comment on our Facebook page @EntertainmentDailyFix and let us know what you think!