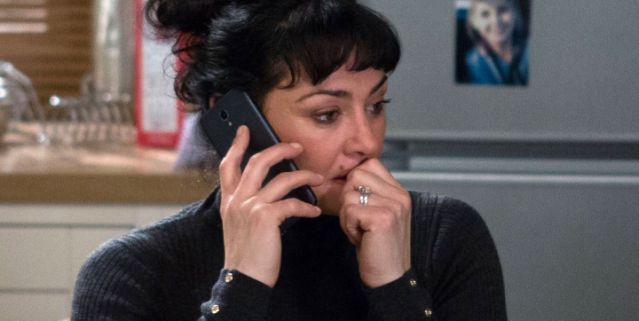 Emmerdale teases chemistry between Moira and Nate ahead of ‘steamy affair’

The pair shared a highly-charged moment

Emmerdale seemed to have confirmed Moira Dingle is set for a ‘steamy affair’ with Nate Robinson.

On Thursday night (June 20), eagle-eyed viewers will have noticed that the pair shared a highly-charged moment – which hinted at a future romance.

Read more: Emmerdale fans predict Maya Stepney will be back for revenge in ‘explosive Christmas storyline’

Earlier this week, The Sun Online reported that Moira will soon embark on an illicit affair with newcomer Nate – who has already snogged Rhona Goskirk, had a one-night stand with Tracy Metcalfe, and is now romancing Amy Wyatt.

Some ITV viewers have already noticed there’s some chemistry between Nate and Moira, after she opened up to him about her turbulent relationship with Cain.

And last night, more sparks seemed to fly between the pair.

During the episode which saw Maya Stepney sentenced to a year in jail for grooming Jacob Gallagher, we also saw Moira and Nate in a scene together.

When the Barton matriarch was about to walk out of The Woolpack without taking her phone with her, Nate jumped up to hand it over.

And, as their hands touched, the moment lasted a smidgen too long as they stared into each other’s eyes.

Later in the episode, after Nate had slept with girlfriend Amy for the first time, Nate was seen fixating on Moira as she returned home bickering with Cain.

One fan tweeted: “And so it begins… Moira and Nate. #Emmerdale.”

#emmerdale So now Nate's going to hook up with Moira? Oh lord.

And so it begins… Moira and Nate. #emmerdale

So the Nate and Moira thing is true then…#Emmerdale

Oh FFS they really are going down the Nate and Moira route then? Ugh #Emmerdale

Is Nate going to try it on with moira now? Been with every girl practically now #Emmerdale

Whaaaaat was that about?! One touch of the hand from Moira and Nate is calling Amy needing a booty call after just telling her he wanted to wait?! Please don’t make him a pig or a love rat! 😢 I thought he was sincere #Emmerdale

Why are #Emmerdale hinting that Nate and Moira are gona have a fling! Its so predictable and cringeworthy.

I’m not on board with Moira and Nate. Ugh. #emmerdale

Another said: “So now Nate’s going to hook up with Moira? Oh lord.”

A third added: “So the Nate and Moira thing is true then… #Emmerdale.”

“Is Nate going to try it on with Moira now?” asked another. “Been with every girl practically.”

Here at ED! we revealed earlier this week that some fans predict Nate’s obsession is deeper than that of lust.

Conspiracy theorists believe that Cain is Nate’s dad and the newcomer has arrived in the village to seek revenge for how Cain treated his mum.