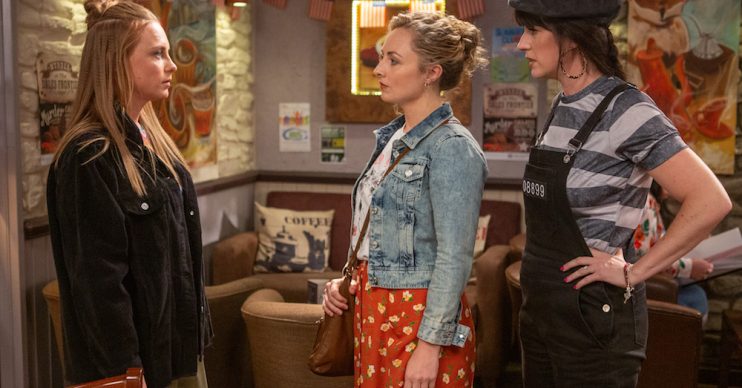 When Amy Wyatt is confronted by someone she stole money from in Belfast she and mum Kerry resort to desperate measures in Emmerdale (Aug 1 2019) with catastrophic consequences.

Although it’s Amy who is in debt it’s her impulsive mum who acts without thinking.

At the factory Kerry spots the charity money raised by the Wild West day and decides this is her chance to help her daughter.

“Kerry doesn’t necessarily go looking for the money in the factory,” Laura Norton, who plays her, tells ED!

“Kerry knows it’s going to affect Amy’s relationship with her son Kyle so she thinks the answer is to be a good mum and sort the problem herself.”

It’s only when Amy points out that Kerry has probably been caught on CCTV that they think twice about going through with it.

“They have a massive discussion about whether this is gonna save them and whether it’s the right thing to do to put the money back,” says Laura.

“In that moment they make a really bad decision, and unbeknownst to them, because of something else they do while they’re at the factory, sparks go wild and a fire starts.”

The Sharma & Sharma fire is the show’s big summer tragedy with fans speculating who may perish in it.

“It’s awful to think you might be responsible for something like that,” says Laura. “There’s going to be a big fall-out. The consequences are huge.”

Kerry’s first regret is that she’s responsible for helping the woman Amy owed money to to find her daughter.

Kerry didn’t realise that was what solicitor Karen (Reanne Farley) was after when she started making enquiries in the village.

“They do manage to get the money back to the person that needs it,” says Natalie Ann Jamieson who plays Amy.

“And they are just hoping and praying that that last minute rash decision was the right decision and that what happens next isn’t worse.”

In the aftermath of the fire mother and daughter will have very different ways of dealing with the guilt of what happened.

“At first Amy just wants to tell the police what they’ve done and stop it there and then,” says Natalie. “Damage limitation. But it’s not as simple as that.”

“Don’t tell anyone!” is Kerry’s solution.

Either way there is no quick fix and it’s a storyline that is set to go on for months with Kerry and Amy’s relationship tested to the limit.

Before the fire Jimmy and Dan do actually try to get mother and daughter to resolve their differences by locking them in jail at the Wild West fundraiser. After the fire it’s a very different story.

“They play out a proper guilt storyline for as long as they can,” says Laura. “The truth is going to come out eventually but we don’t know when.”

In the meantime there’s another spectacular Emmerdale stunt for viewers to enjoy.

“We saw the second explosion and you could feel the heat,” says Laura. “I think viewers are going to be really impressed.”

But will the fire mean goodbye to at least one cast member?