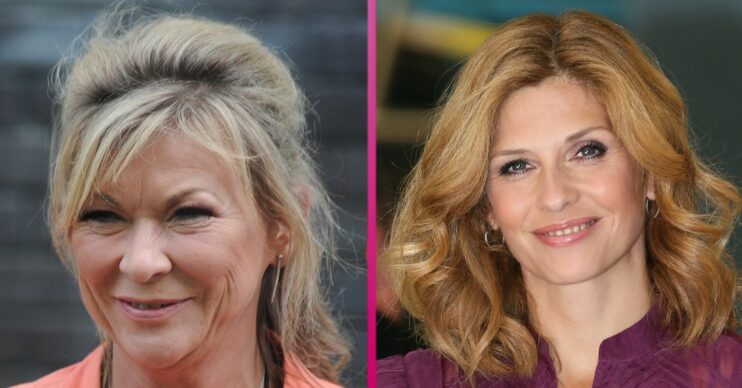 Samantha had an affair with Claire's husband

Emmerdale has pitted Kim Tate against Bernice Blackstock in a war for the heart of Will Taylor this Christmas.

But many fans feel the storyline makes for somewhat uncomfortable viewing given the actresses’ history in real life.

Samantha Giles, who plays Bernice, had an affair with Peter Amory, who was married to Claire King (aka Kim) at the time.

The couple had met on the set of Emmerdale and married five years later in 1994.

The were wed for 10 years, but Claire was left heartbroken when she found out he was cheating on her. She ended their marriage.

At the time, Samantha insisted she and Peter had begun dating after both of their marriages broke down.

However, Claire was resolute things had begun well before she separated from Peter and it actually started when she was working in London on Bad Girls.

What happened between Samantha Giles and Claire King’s husband?

“I had a feeling that something was going on,” she told The Mirror in 2005.

“But then it was Samantha’s husband who wrote me a letter and told me.

“I questioned Pete and he admitted it had been going on for a while. He told me it was over but then it started again. At that point I said: ‘Well, you have to go with her then, because it obviously isn’t going to stop.'”

Claire revealed she was devastated and felt like she was “dying” inside.

However, speaking on Loose Women in 2017, the actress said time was a great healer and she’d actually realised she was also partly to blame for her marriage split.

She said: “I gave Pete, my ex-husband, a second chance, and he went off and did it again.

“It had got past the seven year itch into the 10 years, it was coming to that fork in the road and you either go down that path or you decide to take different routes.

“So nobody was really to blame in that, it was just we’d kind of grown apart.”

Of Emmerdale co-star Samantha, the Kim Tate actress then went on to say: “It kind of wasn’t anything to do with her.

“We got to that stage where we were doing our own thing. At the end of the day hindsight is a great thing and you can always look back and quite honestly it could have been me.”

“Is there a point in struggling along when you get to that stage?

“Yes it was hard, I was in my 40s, and there’s a crossroads career-wise when you reach the 40s there’s fewer parts in our business and everything seemed to implode because it happened at once.”

But Claire has since forgiven Samantha and the pair are now friends.

“I met Sam at a funeral of a dear friend of ours and we bumped into each other,” she revealed.

Are Samantha Giles and Peter Amory still together?

Samantha and Peter did not stay together.

She married production manager Sean Pritchard and the couple have two children together. Eve was born in 2009 and Olivia in 2012.

What’s happening with Bernice and Kim in Emmerdale?

Bernice and Kim are fighting it out for the affections of Will Taylor.

He’s with Kim, but after she went away for a while, he grew closer to Bernice. Now he’s torn between the two.

At Christmas, Bernice will tell Will he must choose between them and Kim overhears.

She then makes a call for help dealing with a ‘disposal’. It turns out she wants to move Malone’s corpse to free Will of any ties to her.

Will is so touched by the gesture he gets down on one knee and proposes to her. Will she accept?

And what does this mean for his future with Bernice?

What are fans saying about the Kim and Bernice storyline in Emmerdale ?

Viewers at home have certainly found this storyline a bit of an uncomfortable watch given the off-screen history.

One asked: “Just wondering how difficult it may be for the actors playing Bernice and Kim to appear together in light of their personal history?”

“Grimacing a bit over the choice of characters being love rivals in this Kim-Will-Bernice storyline. A queen like Claire King doesn’t deserve this,” added another.

A third wrote: “This Will, Bernice and Kim storyline is a bit close to the bone after real life events is it not?”

“Why does Bernice keep trying to steal Kim’s men ON AND OFF SCREEN,” said someone else.