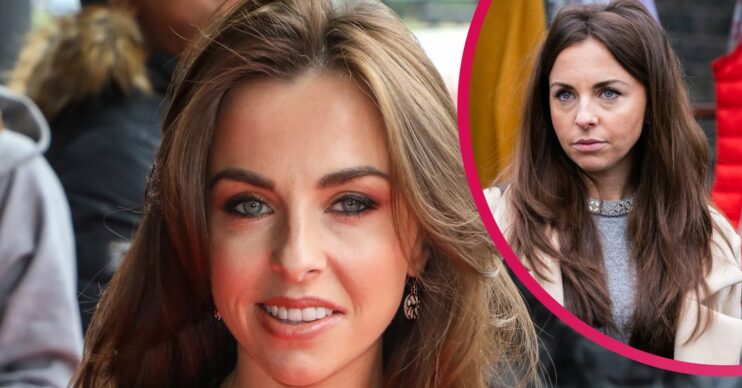 EastEnders star Louisa Lytton has revealed her baby daughter, Aura, could star alongside her on the soap in the future.

Currently on maternity leave from EastEnders, Louisa spoke about possible plans for her return.

When did Louisa Lytton have her baby?

Louisa gave birth to her first child in September and revealed the news with a sweet Instagram post.

She shared an image of her and fiancé Ben Bhanvra with the little one’s fingers and said they were “utterly overwhelmed with love”.

Today the actress appeared on Loose Women with a sleeping Aura and revealed she’d had COVID-19 shortly after giving birth.

“It was difficult because I had a long labour which resulted in an emergency c-section and just as we were finding our feet, we then both got COVID,” she told the ladies.

“So it’s not been the best start, but she’s been fine throughout, so that’s all we can ask for really.”

Louisa Lytton on her daughter starring in EastEnders

With the timings pretty similar, Carol was intrigued to know if Louisa could see her own daughter joining the soap as Ruby’s new baby.

“Yeah I could,” Louisa said. “Definitely, if I go back, it’ll be with a child, whether she wants to be part of it, who knows.”

Is Ruby Allen returning to EastEnders?

Read more: EastEnders: Who is Dotty’s mum Sandy and who plays her?

Louisa’s little girl is only five weeks old so any return is far in the future.

However, the door has been left open for Louisa as Ruby is still alive. She was arrested after Jean Slater falsely told the police Ruby had been dealing drugs.

The lie was in retaliation for Ruby’s fabricated story that Jean’s daughter Stacey pushed her down the stairs and caused Ruby to lose her baby. Stacey ended up in prison for the crime – which covered actress Lacey Turner’s maternity leave.

Speaking of possible return plans, Louisa told podcast Made By Mammas:  “I’m at home being a mum. I’m doing the thing I’ve wanted the most in life, so I don’t think I’ll be in a rush to go back to work.

“But then, at the same time, I don’t know because that is who I am,” she continued. “So will I have that moment of, ‘I need a bit more of myself back again’?”

She admitted she would give it a year and see how she felt.