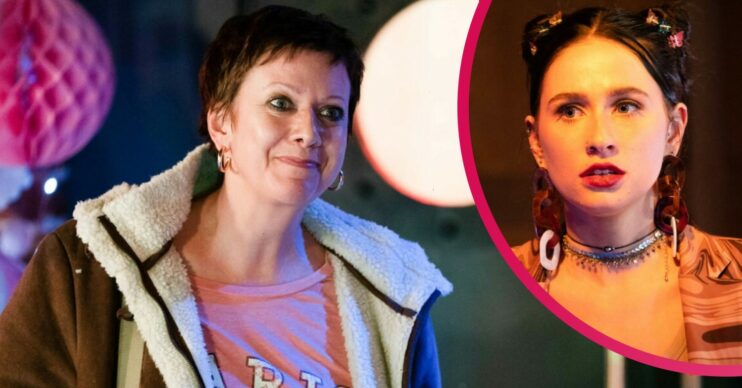 EastEnders: Who plays Dotty’s mum, Sandy? Is her daughter in danger?

Martha Cope has joined the cast as Dotty Cotton's mum

With Dotty’s plan to fleece Sonia Fowler for all her money in full swing, Sandy’s presence will surely ruffle a few feathers.

Here’s all you need to know about Sandy and actress Martha Cope who plays the wayward parent.

EastEnders: Who is newcomer Sandy?

Sandy is Dotty Cotton’s mother, but she’s not exactly a typical mum.

Dotty was conceived during a one-night stand between Nick Cotton and Sandy in 2001. They met in a squat and Sandy was an alcoholic.

Shortly after their night together, Nick went back to prison, but he received a letter from Sandy telling him she had given birth to their daughter.

When he was released from jail, Nick took custody of Dotty and told her Sandy had died in a car crash. But when Sandy turned up, his lies were exposed.

Why has Sandy come to Walford?

Sandy arrives on Tuesday, October 5 2021 and immediately bumps into Rocky. His face drops as he recognises her, knowing she could out his identity and derail his plan.

Approaching Sonia, Sandy asks for Kirsty – which is Dotty’s real name – and Sonia realises who she is.

Dotty is not happy to see her mum at all especially as she’s drunk. But why has Sandy come to Walford?

Rocky is terrified Sandy will blow their cover, but what is she really after?

Who plays Sandy Gibson in EastEnders?

Sandy was previoulsy played by Caroline Pegg during her first appearance on screen in 2010.

She has been recast and is now played by Martha Cope.

Of her arrival on the Square, Martha said: “I have watched EastEnders since it began and I’m beyond excited to join such an iconic show and having a great time playing Sandy.”

Jon Sen, EastEnders executive producer, said: “Martha is a brilliant addition to our cast – we’re excited to welcome her to Walford.

“To say Sandy has a chequered past is an understatement and it’s no secret that Dotty’s upbringing was marred by her parents.

“Sandy’s arrival catches Dotty off guard and she’ll be forced to confront everything she’s tried to leave behind.”

What else has Martha Cope been in?

She has also been in Doctors, Holby City, Men Behaving Badly, and Casualty.

In late 2013 she starred in 10 epsiodes of Emmerdale as DC Morden who was investigating the fire at Home Farm started by Declan Macey.

She appeared in EastEnders previously in 2014 as Melissa Phillips, area manager of the Minute Mart.

The actress has had a guest role in Coronation Street too, as a date of Kevin Webster’s who he met at a single’s night in December 2015.

Martha’s parents have also both appeared in Corrie, with her mum, Renny Lister playing Jenny Stark in 1961, and her dad, Kenneth Cope, playing Jed Stone on and off between 1961 and 2009.

Knowing she needs to keep her mum on-side, Dotty invites her for a chat later in the week.

Rocky insists Dotty needs to get rid of Sandy or else she’ll blow their whole plan.

Later, Bernie watches as Rainie runs into Sandy, who’s in a rough state. It looks like a drug deal is taking place between the pair, but what’s really going on?