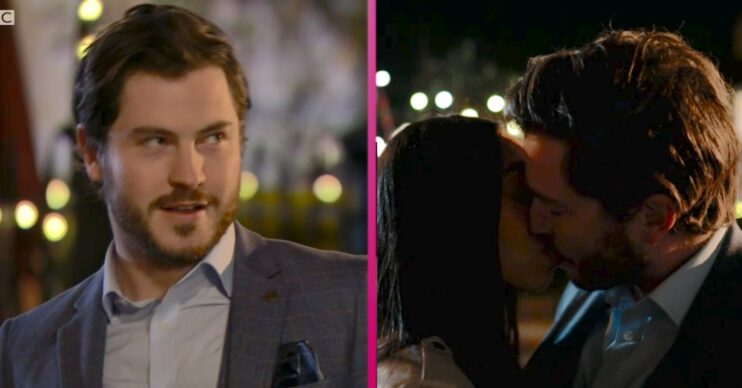 Chelsea is in danger after seducing Gray Atkins

Chelsea is in desperate need for a lawyer after her ex-boyfriend Caleb gave her a string of stolen goods – and then told the police.

But with no money she had to be inventive – and picked Gray Atkins to represent her.

What happened with Gray and Chelsea in EastEnders?

Despite being the daughter of a serial killer, Chelsea has no idea Gray is like her dad.

He has so far killed his wife Chantelle, Tina Carter and Kush Kazemi during his reign of terror.

Chelsea convinced him to go out for dinner with her – and she set about manipulating him to get what she wanted.

Determined to get him to represent her for free, she chose to seduce him.

And when he agreed she ordered champagne.

“So what are we celebrating?” asked Gray.

Flirty Chelsea told him: “Me bagging myself a sexy lawyer. To new relationships.”

But she was overheard by Chantelle’s dad Mitch who was furious and asked if Gray bought all of his clients champagne.

The pair then enjoyed a long date and it wasn’t over after the meal.

“I had a really good night tonight,” Gray said as Chelsea walked him home.

The pair then passionately kissed.

Grabbing them, she said: “Why wait?” and then walked up the steps into the house.

The pair spent the night together but fans are fearful for Chelsea and think Gray will kill her.

Read more: EastEnders SPOILERS: Suki Panesar to show ‘softer side’ as Vinny fights for his life

A second said: “Chelsea, you are dealing with a very dangerous man!”

A third said: “Chelsea is going to end up being Gray’s next victim if Gray finds out she’s playing him. #Eastenders @bbceastenders”