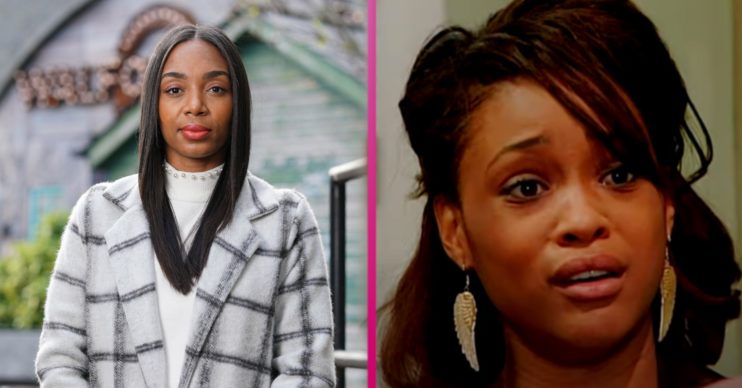 Zaraah had a role in another popular soap!

EastEnders has announced Chelsea Fox will be returning played by a new actress called Zaraah Abrahams.

Chelsea was last in Walford from 2006 until 2010, when she was played by Tiana Benjamin.

During her time on Albert Square, she had a brief fling with Grant Mitchell before falling for Sean Slater.

She even had an encounter with Jack Branning, who is now dating her mum, Denise. Her father is none other than serial killer Lucas Johnson, who will also be returning to Walford soon.

Chelsea left in 2010 to live with her grandmother as she couldn’t bear to be known as the daughter of a killer.

But she will be making a return this year, with Zaraah taking on the role. But who is Zaraah, and where have you seen her before?

EastEnders: Who is Zaraah Abrahams? Where have you seen her before?

Zaraah Abrahams has had a number of TV roles in the past including on ITV soap Coronation Street.

Zaraah played Joanne Jackson in Corrie from 2005 until 2007. Between 2008 and 2010, she was a series regular in BBC school drama Waterloo Road, where she played Michaela White.

She has also made appearances in Scott and Bailey, Bedlam and Holby City.

In 2014, she starred in a film called Da Sweet Blood of Jesus and in 2015, she played Opal Edwards in series two of HBO’s The Knick.

What did Zaraah say about joining EastEnders?

Speaking about joining the soap, she said: “I am so excited to be joining such an iconic show and I am really looking forward to taking on the role of Chelsea Fox.”

Speaking about Chelsea’s return to Walford, Executive producer Jon Sen added: “When Chelsea was around, trouble was never far away, and that is true as ever when she returns to Walford later this year.

“We are excited that fans are going to see Chelsea back on their screens and thrilled that the wonderful Zaraah is going to play her.”

Are you looking forward to Chelsea’s return? Leave us a comment on our Facebook page @EntertainmentDailyFix and let us know what you think of this story.