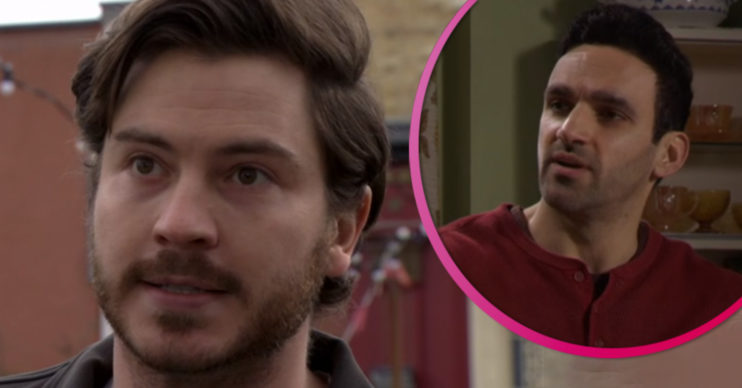 Viewers know Gray was the one to murder Kush to stop him leaving with Whitney.

But as far as Whitney’s concerned the Mitchells are responsible – and last night she went to kill one of them.

Gray stopped her just in time.

“[Kush] wouldn’t want you with blood on your hands,” he said as he stopped her from leaving with a knife.

“Kush was a good man, he wouldn’t want this.”

And he saw a way out to make Whitney love him – and to get away with another murder – by blaming the Mitchells.

“I had my suspicions as soon as it happened that they were involved,” Gray lied.

“All you want is to make them pay, right? All of them. Everyday. For the rest of their lives.

“Get them locked up, for so long they won’t touch the ground again until they’re buried in it.”

He then asked her to hold onto her pain and her hatred for the Mitchells while he worked on a plan.

“Can you do that for me?” he asked, subtly manipulating her.

Meanwhile, viewers of the soap reckon Gray will pin blame on the Mitchells.

One wrote on Twitter: “Whit working with Gray to bring down Ben & Phil!

“I always thought Gray working with The Mitchells was so random, but it all makes sense now!”

Another said: “So Gray is putting the blame on the Mitchell’s for Kush’s death, oh my god!”

A third added: “Gray’s manipulating Whitney to frame the Mitchell’s for Kush’s murder. After Whitney finds out Gray was the one that killed Chantelle, Tina and Kush, she should stay single for the rest of her life.

“Every man she has been with has always ended in heartbreak for her.”