Actress Julia Goulding, who plays Shona Ramsey on Coronation Street, has shared a picture of her baby bump as she attended The Baby Show.

The 34-year-old posted the picture to her Instagram page.

I had such a wonderful time @thebabyshow this weekend! I met so many lovely people and realised how huge this baby world is! I’ve got so much to learn. Bring it on! #growingbump #waddlingnotwalking #swollenhandsandfeet #itsallworthit #cantwaitforbabytoarrive ❤️🤰🏻

She captioned the post: "I had such a wonderful time @thebabyshow this weekend! I met so many lovely people and realised how huge this baby world is!

I had such a wonderful time at The Baby Show this weekend!

Fans also rushed to comment, with one writing: "You look absolutely beautiful!"

Julia and husband Ben, who got married in a secret ceremony back in February, announced they were expecting a baby in May. Julia and Ben are expecting their first baby (Credit: Splash)

At first David had no idea that Shona was Clayton's mum but eventually he found out the truth.

Despite not wanting anymore to do with her, he eventually gave their relationship a chance.

Currently David is in prison for helping his brother Nick steal £80,000 of their grandmother's money. 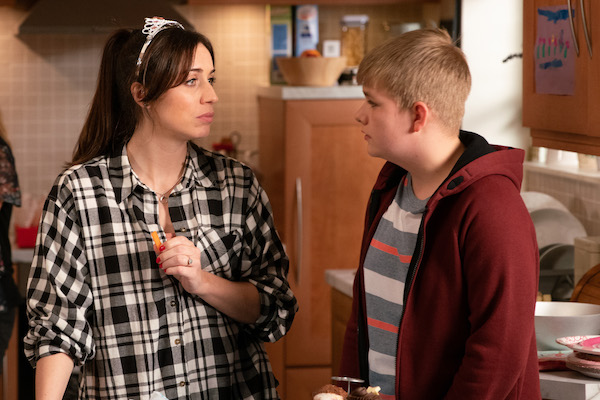 Max has been behaving out of character since David went to prison (Credit: ITV)

Whilst David has been in prison, Shona has been struggling with David's son Max.

Max has been acting out and last week, the pair got into an argument after Shona accused him of pushing little brother Harry over.

This caused Max's grandmother Marion (mother of his biological dad Callum) to step in and threaten to call social services.

Meanwhile, David discovered Josh, the man who raped him last year, is staying in the same prison.