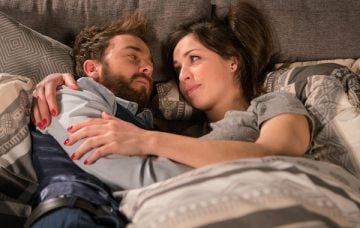 Coronation Street’s David and Shona: The history of their relationship

They've just got engaged, but it hasn't always been plain sailing

David Platt and Shona Ramsey have just got engaged, but their path to true Coronation Street love has definitely not run smoothly.

They’ve overcome a lot of odds to be together, but are they made to last?

Shona (Julia Goulding) first appeared on screen on December 16, 2016, where she met David in a bar and attempted to flirt with him.

David later noticed his wallet was missing and he realised Shona had stolen it. He went back to the bar and discovered Shona had a reputation for stealing, so waited for her to return.

She tried her luck with David again, but he confronted her over stealing his wallet, insisting he only wanted the picture he kept of Kylie in there. Shona revealed if she had taken his wallet she’d have stolen the money and thrown the rest away.

Shona then found the wallet in the bins outside, and was horrified when she recognised the picture of Kylie…

Finding herself with nowhere to go on Christmas Day, Shona took refuge in the church when Billy Mayhew (Daniel Brocklebank) found her and decided she was his sign from God that he was to return to the church and save her.

He took her back to number 11 and allowed her to stay until they could find her a hostel, but Shona ended up stealing the hostel worker’s purse in order to replace what she took from David, and posted his wallet back through his letterbox.

Billy persuaded landlady Eileen Grimshaw (Sue Cleaver) to let Shona stay and she got a job at Roy’s Rolls.

As she settled into life on the Street, Shona had several encounters with David – one where she returned his daughter, Lily’s toy rabbit and earned a thank you card, and another where he asked her to take his dog back to his house after he escaped.

While in the house, she was looking around and hid when Gail Rodwell (Helen Worth) and Sarah Platt (Tina O’Brien) returned and began talking about David’s previous plan to blow up the prison van carrying Clayton to court.

Gail begged Shona not to say anything, and viewers later saw Shona visiting Clayton in prison, revealing he was her son.

Shona then confessed to Gail who she really was, and although they both agreed to keep each other’s secrets, when David drunkenly tried to kiss Shona, Gail tried to blackmail her into leaving the Street. But Shona was persuaded to stay by her friends.

And it’s a good job she did, because she was the first person to realise her evil ex, Nathan Curtis (Chris Harper) was grooming David’s niece, Bethany Platt (Lucy Fallon).

Shona tried to save Bethany, threatened Nathan to leave her alone and attempted to warn David of the danger Bethany was in. But Nathan had two men beat her to a pulp and leave her for dead.

She was found by Craig Tinker and admitted to hospital, but discharged herself to get to David and tell him to save Bethany.

Shona then collapsed and was rushed back to hospital, where a worried David was by her side. The pair eventually kissed.

But their relationship was not to be just yet, as the next day David found her by Kylie’s grave and she confessed who she really was.

Devastated David ordered her to leave, insisting he never wanted to see her again.

However, when the cast against Nathan looked likely to collapse, Sarah begged David to track Shona down so she could give evidence. He reluctantly agreed and found her looking for girls on the street who could testify against Nathan.

Shona moved back to the Street and David wasn’t pleased. However, he couldn’t fight his feelings any longer and they finally slept together and agreed to give their relationship a go.

It wasn’t long before it was severely tested though when Clayton’s father, and Shona’s ex, Dane Hibbs (Simon Naylor) showed up and demanded their £6000 scratchcard win or else he’d tell David’s kids who Shona really was.

David ended things with Shona, but they got back together and revealed the truth to David’s stepson, Max, themselves. Max was very mature and gave the couple his blessing, telling Shona she wasn’t to blame for what Clayton did.

In April 2018, David abruptly ended things with Shona again. She had no idea what she’d done wrong when he told her he had simply fallen out of love with her.

But the truth was far, far darker than that. David had been raped by supposed friend Josh Tucker (Ryan Clayton) and struggling to cope had decided to end things with her.

Shona rightly felt there was more to it and as she moved in with Roy Cropper (David Neilson) she thought David was suffering delayed post-traumatic stress following Kylie’s death.

When David beat up Gary Windass, Shona stood by him, but was left devastated when David began a relationship with new salon apprentice Emma Booker (Alexandra Mardell).

It was only when Aidan Connor (Shayne Ward) took his own life in May 2018 that David felt he had to speak out. He confided his rape in Shona and she vowed to support him.

They reunited and she stuck by him through reporting Josh to the police, his court appearance for attacking Gary, and his admission of what had happened to him to his family.

Things settled down for the pair for a few months, but in February 2019 Shona went to visit Clayton in prison to tell him his father had died. Far from bothered, Clayton asked her to smuggle drugs in for him or else he’d be beaten up.

Shona couldn’t bring herself to do it, and when Clayton staged an escape at Dane’s funeral, Shona found herself at loggerheads with David once again.

With Clayton on the run, Shona helped him get to an abandoned building and took him food and money, which she had stolen from David.

In fact, though, far from betraying David, Shona had called the police and told them where Clayton was.

Upon finding out what she’d done, Clayton took her hostage. Shona tried to get through to her son, insisting he was still the little boy she once knew, but she was left stunned as he coldly revealed his dad’s death had been because he was smuggling drugs into the prison for Clayton to sell, and then he called Dane and idiot.

With the police surrounding the building, and David racing to be by his girlfriend’s side, Shona managed to escape Clayton, but then ran back into the building when she realised they police had guns ready to shoot her son.

That proved to be a big mistake when Clayton decided he was going to kill her and held the knife to her throat. Seconds later, the front door burst open and Shona came staggering out, collapsing in David’s arms.

But it turned out she hadn’t been hurt, instead she’d got hold of the knife and stabbed Clayton.

As a devastated Shona tried to deal with the fact she’d stabbed her own son, David was there for her, comforting her and telling her he loved her.

Shona decided it was time to disown her son, as he was no longer the baby boy she raised, and she was reunited with Max and Lily.

The whole ordeal made David realise he never wanted to risk losing Shona again and he hatched a plan to propose.

He produced a ring on Wednesday March 6 and asked her to be his wife. She happily agreed and the loved up pair celebrated by telling the family their happy news.

Will they make it down the aisle without any other drama befalling them?

Are you fans of Shona and David together? Leave us a comment on our Facebook page @EntertainmentDailyFix and let us know what you think!