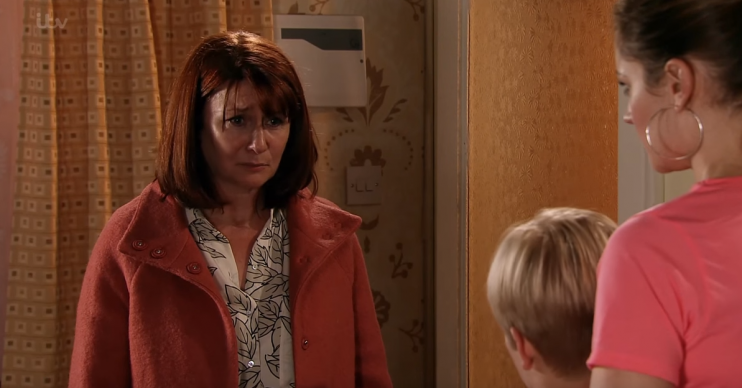 Marion, who originally appeared in the soap from 2015 until 2016, was previously played by Susan Cookson.

However, preview pictures released by the soap today have shown Marion will be returning, played by a different actress.

According to Digital Spy, Max’s grandmother will now be played by The Bill star Kerry Peers.

The pictures reveal that Marion turns up to tell Shona that Max has been making regular visits to his gran – and telling her all about Shona’s bad parenting.

Although the soap haven’t given a reason for the recasting, Susan Cookson is now a recurring guest star in ITV’s Emmerdale.

Earlier this year, Victoria Sugden was raped by Lee after Emmerdale’s Big Night Out.

Soon after the horrific ordeal, she discovered she was pregnant with Lee’s child.

Thinking Victoria was a liar, Wendy arrived in the village harassing Vic.

Eventually Wendy found out Victoria was pregnant and demanded Lee should have parental rights.

After Victoria’s brother Robert attacked Lee and put him in hospital, Wendy made another appearance as she stayed by her son’s bedside.

It seems Susan’s stock is to play the mother of the bad boy, as Corrie’s Callum was definitely no angel!

Callum was on the cobbles from 2014 to 2015 and was Kylie Platt’s ex-boyfriend, and the biological father of her son, Max.

Kylie came just in time hitting Callum over the head. However, the blow ended up killing him.