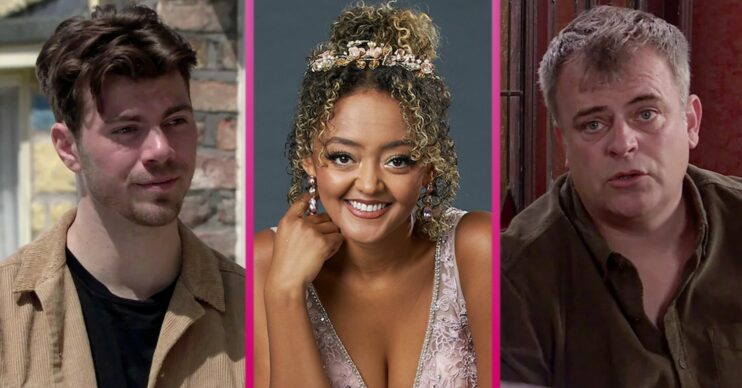 Will Emma's wedding day to Curtis go ahead?

Coronation Street star Alexandra Mardell has revealed that Amy Barlow will lift the lid on Curtis Delamere in spoilers ahead of Emma Brooker’s wedding.

Viewers of the ITV soap will know that Emma recently discovered her fiancé was lying about his illness as part of a fictitious disorder.

However, the pair are still set to get married this week.

Emma discovered the truth about Curtis when she found out his very strong heart medication were in fact vitamins.

After confronting Curtis, he managed to persuade her he’d actually ditched the meds and was taking a holistic approach instead.

However, things still didn’t add up for Emma and she met up with his dad, Neville, to get answers.

Despite his lies, Emma is still planning to go ahead with her wedding.

In a new interview, actress Alexandra opened up on her character’s storyline.

The star went on to reveal that Amy lets everything slip about Curtis to dad Steve McDonald.

When asked how she would feel over the situation, Emma told ED!: “To be honest, I would be fuming, but Emma is so lovely.

“I think she just understands that Amy has always got her best interests at heart and she was only trying to help.

“Maybe a little bit of Emma can feel the relief in a way that everybody knows now and this is it and this is what she still wants to go on with but definitely no hard feelings towards Amy.”

Meanwhile, the soap star also explained how her own wedding may differ to Emma’s.

And it appears the actress couldn’t be more different to her character.

Alexandra explained: “It’s kind of like the best of both worlds because Emma’s style and wedding is the complete opposite to anything I would choose.

“It’s kind of nice to have a feel and look around at the things I would never have and really enjoy them.”

However, it’s safe to say that Alexandra won’t be feeling the same as Emma on her wedding day.

Speaking about the upcoming episode, Alexandra said: “She is so nervous – is this the right thing to do. Everything feels that but when there’s lies before they’ve tied the knot. But she is hopeful and so in love, that overrides everything.”

But after taking Steve’s charity money, will Curtis go ahead with the wedding?