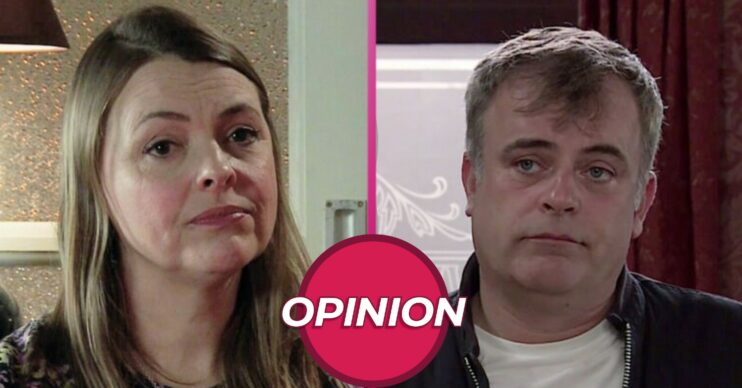 OPINION: ‘Steve and Tracy are the best thing in Coronation Street right now’

The couple have become the centre of the cobbles

Something strange is happening in Coronation Street and it’s all down to who is stealing scenes.

Years of dramatic storylines and huge stunts have left most characters with more baggage than Heathrow during the summer – but for two characters it has changed everything.

Who would have thought that this year of all years – Steve McDonald and Tracy Barlow would be the saviours of Corrie.

One’s a cold-blooded killer who makes Richard Hillman look like an amateur and the other has just gone through years of hell losing two children.

But here we are.

When Tracy whacked Charlie Stubbs over the head with an ugly ornament it should’ve been over.

No-one can get away with pre-meditated murder.

And they certainly can’t come back from it and turn into a comedy queen of the cobbles.

Coronation Street is getting it right with Steve and Tracy

But somehow Tracy Barlow has done it.

Instead of killing her way through Weatherfield, she’s inherited the acid tongue of her late grandmother.

Rarely an episode goes by without her savaging one of her poor neighbours.

While Sinead Tinker was dying, most people were more focused on drunk Tracy’s brilliant impression of her.

And her defending her family punching bag Daniel to Billy and Paul was sheer genius.

She has gone from cold-blooded killer to cobbles protector.

And Steve has had quite the transformation too.

After years of being harangued by the likes of Tracy, Michelle Connor and Leanne Battersby – Steve was nothing more than a laughing stock.

But with the loss of his son Oliver, his daughter Amy’s own troubles and finding out Emma is also his daughter – he has been transformed.

Now with a more serious edge, his comedy has been tempered.

And his marriage to Tracy – doomed as it could have been – is realistic and grounded.

However, let’s face it – they are hilarious together.

Forget Fiz and whatshisface, Steve and Tracy are the true heirs to Jack and Vera. We said it.