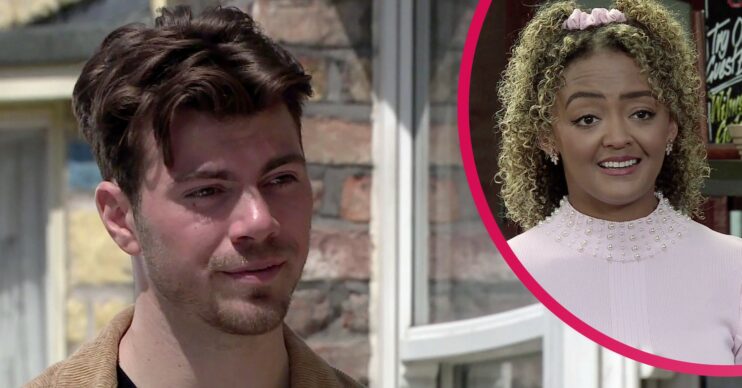 What is wrong with Curtis in Coronation Street? Is he going to die?

Can he be trusted?

Curtis Delamere in Coronation Street has convinced everyone he’s dying. But it’s been revealed that he’s not.

In fact, he’s not physically ill at all. His problems are a mental health issue.

So what exactly is wrong with him? And can it be treated?

Who is Curtis Delamere in Coronation Street?

Heartthrob Curtis arrived on the cobbles in May and quickly swept Emma Brooker off her feet.

He offered to help her move some barrels into the store at the pub and quickly secured himself a date as a thank you.

Her dad, Steve McDonald, wasn’t as impressed with her choice of beau when he recognised Curtis as the ‘thug’ who’d knocked him off his bike.

But they soon managed to put it all behind them and Emma was smitten.

The pair’s relationship went from strength to strength, but it soon became clear Curtis was hiding something. Steve spotted him with another girl and assumed he was cheating, but the truth was far more upsetting.

Does Curtis in Coronation Street have an incurable heart condition?

Curtis eventually confessed that the other girl was from his terminal illness support group and that he had an incurable heart condition.

“It’s a heart condition. Beyond that, doctors are baffled,” he revealed to Steve. He went on to admit that no one knows what the future holds for him: “I could have a totally normal lifespan or that’s it, any place anywhere…

“My heart has stopped a couple of times, in layman’s terms I was dead.”

He later explained to Emma the doctors thought it was Hypertrophic cardiomyopathy – where the heart muscle becomes abnormally thick making it harder for the heart to pump blood. This condition can be managed, but it turned out Curtis had other symptoms too.

These were harder to explain and didn’t fit with the diagnosis.

Last month Curtis collapsed on the cobbles after Steve’s car broke down. Curtis pushed the car, but as it leapt into life, he sunk to his knees, clutching his chest.

Steve rushed him to hospital and Curtis later proposed to Emma determined to live life to the full while he still could.

Steve and Tracy then offered to use their personal savings to pay for a private consultant. But when viewers saw Curtis visit the consultant the truth was finally revealed…

What is wrong with Curtis in Coronation Street?

Curtis is suffering from a factitious disorder in which he lies he’s ill to get attention.

At his specialist appointment on December 1, Curtis left Emma in the waiting room and went in to see the consultant who proceeded to tell him there was nothing they could do for him.

Curtis argued, but the specialist cut him off and said there was nothing they could do for him because he’s in perfect health.

Although Curtis showed him a scar on his chest, the doctor revealed it was from an operation to cure a small hole in the heart when Curtis was a baby. He told Curtis he needed psychological help, but Curtis stormed out.

But back on the cobbles, he was shocked by the arrival of his dad, Neville, who he had told Emma was dead.

As Curtis scrambled to cover up his lies and insisted to his fiancé Neville was his stepdad, it became clear Neville knew exactly what Curtis was doing and that he has a history of lying about his health.

Why is Curtis lying about his heart condition in Coronation Street?

Actor Sam Retford, who plays Curtis, told ED! and other media at a recent press event: “It comes from a place of neglect and forming inauthentic relationships with people in his childhood.

“His preconceived notion with what it is to feel loved is built on really unstable foundations.”

He went on to explain it all stems from things that happened when Curtis was younger.

“It comes from a need to manipulate situations so he gets that feeling. He’s just lonely. There’s quite a lot that happened to him when he was younger and he saw a light and found it was easy to tap into people’s empathy towards him, and why wouldn’t you?

“If we all had a button we could press and it means that people love you of course we’d sit there pressing it all day long because it’s a nice thing to have people care for you.

“When you don’t have that as a kid, you chase it and he’s pretty lost.”

Sam added that what Curtis is doing is not malicious: “He’s human. There’s traits of him in all of us.”

When does Emma find out the truth?

Emma was left reeling last night (Monday, December 13) after Tyrone’s daughter Ruby swallowed one of Curtis’s ‘heart’ pills. However the doctor has told her they were just vitamins.

Confused and scared Emma doesn’t know what to believe as she confronts her fiancé.

Later this week she calls Neville and asks him for the truth.

When Curtis finally admits he’s not dying and reveals he fakes it for attention and can’t stop, Emma orders him to pack his bags.

But when Steve tells her about the £4k Curtis raised for charity, will she have a change of heart?

Do Emma and Curtis get married?

Next week Emma, still unsure, gets ready for her wedding day.

She dresses in her bridal outfit, and waits for her groom at the hotel, despite her obvious reservations.

But it looks like he’s not coming… Steve has handed Curtis the pin and his bank card and asked him to transfer £100k to Oliver’s fund. Has Curtis done a runner with the cash?

Will Emma be left completely heartbroken? And how will Steve and Tracy react to the truth about their future son-in-law?