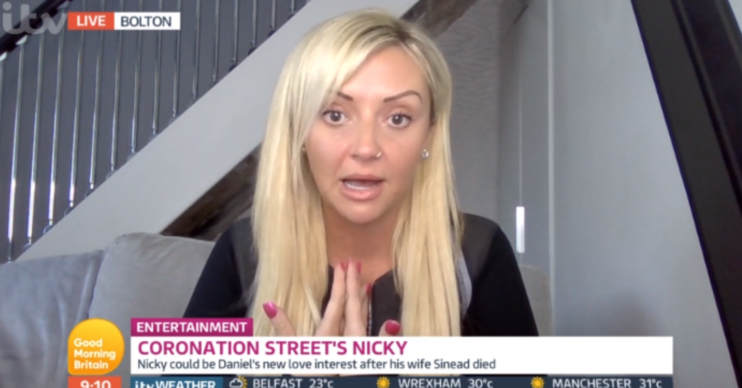 Coronation Street newcomer Kimberly Hart-Simpson, who plays Nicky Wheatley, has revealed she is bisexual as she supports the LGBTQ community.

Corrie viewers were recently introduced to sex worker Nicky after she met Daniel Osbourne at an event.

During the interview, the actress talked about a dress she designed for her best friend and former Hollyoaks star Jessica Ellis.

It was a rainbow-themed design which Jessica wore on the red carpet. Kimberly explained that it was a really important moment for her as she is also a part of the LGBTQ+ community.

She said: “It was during pride month as well, so it was really important that we were represnting the LGBTQ community and I’m part of that as well.

“I represent the B so for me to do that was really, really important. This was sort of the discovery of when I was learning to sew, so she put a lot of trust in me to do that.”

Kimberly has recently revealed she has been auditioning for Coronation Street for over 10 years.

After graduating, Kimberly began auditioning for the ITV soap in order to fulfil her dad’s dying wish for her to be on the show.

The actress grew up watching every episode with the Corrie-mad dad Kevin, who tragically died 13 years ago from a form of bone cancer.

Nicky has been brought into the show and is thought to be a new love interest for Daniel.

But could there be another reason for her character’s introduction?

Read More: Samia Longchambon fans say she looks ‘much younger’ as she returns to Coronation Street

As viewers now know, Nicky is a sex worker. However a few months ago Geoff, who has been abusing his wife Yasmeen, had been hiring and sleeping with escorts.

Could Nicky be one of the women he encountered?