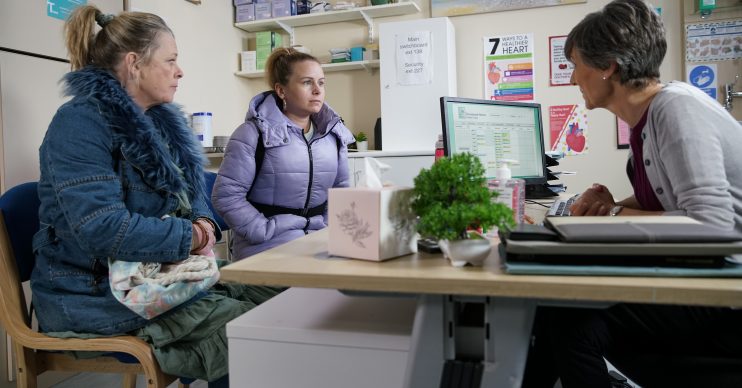 Since the birth of her quadruplets, Gemma has been struggling to cope being a new mum.

With a lack of sleep and having to deal with mean mums at a local baby group, it’s become obvious Gemma is struggling with postnatal depression.

Recently, the mum-of-four was shaken when she dreamt she put her son Aled in the washing machine and turned it on.

Although Gemma’s mum Bernie can see she’s not right, Gemma keeps putting it down to her lack of sleep.

Despite Gemma trying to play down how she really felt, Bernie told the doctor her daughter is not coping and has been having bad thoughts.

Dr Gaddas gave Gemma the number of some support groups and said she would be getting her health visitor to check on her more often.

The ongoing storyline has left Corrie viewers divided.  Some are finding it boring.

I’ve had all I can take of Gemma and the quads storyline now. It’s utterly tedious #Corrie

But others have said they’re “impressed” with the storyline for bringing light to struggling mums and postnatal depression.

Very impressed with @itvcorrie handling of Gemma's storyline. Gemma's words about struggling to breastfeed and letting her babies down? I said them myself, word for word, as I'm sure thousands of other mums have, so 👏👏👏👏👏👏👏 #gemma #Corrie #postnataldepression

Gemma’s storyline really makes me sad, because I know that many women experience what she’s currently going through. It’s even harder as she has 4 babies! Bless her #Corrie

Feeling for Gemma! I’ve been there and experienced this! Thank you coronation st for tackling this storyline and creating awareness! #corrie #CoronationStreet #postnataldepression

Another great storyline being raised & highlighted! Great that #JaneHazlegrove is back on the cobbles again to support #Gemma #PostNatalDepression #Corrie

Now Gemma has seen a doctor, will get the support she needs?

What’s next for Gemma?

Next week, Gemma and Chesney are thrilled when a hearing aid arrives for Aled and they go to have it fitted.

Love how they’re tackling this storyline.

Aled’s face lights up when he hears Gemma and Chesney’s voices for the first time. Are things finally starting to look up for Gemma?

She later tells Bernie that now Aled’s hearing aid has been sorted out she can cope on her own and asks her to move out, leaving Bernie stunned.

Will Bernie leave Weatherfield once again?

The next episode of Coronation Street airs on Friday at 7:30pm, followed by at second episode at 8:30pm.