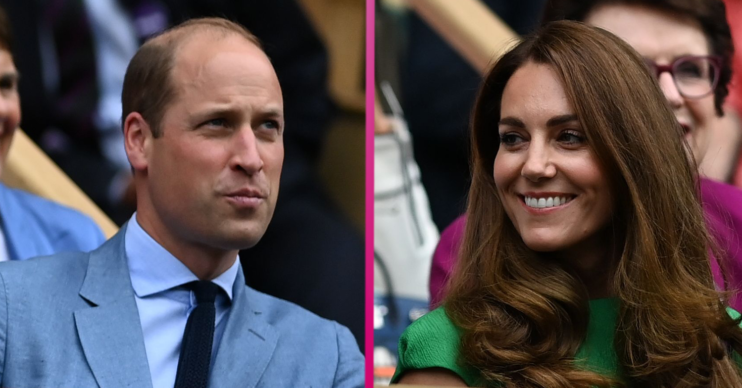 Duchess of Cambridge at Wimbledon: Kate comes out of isolation for women’s singles final

Prince William joined his wife at the All England Club

The Duchess of Cambridge was out of isolation and at the women’s singles final at Wimbledon today (July 10).

Kate attended with husband Prince William and it was the first time she was seen since day five of the tournament on July 2.

On July 5 it was revealed that Kate had been in contact with someone who had tested positive for COVID and, as a result, was forced to isolate.

Duchess of Cambridge at Wimbledon

Kate looked gorgeous as she arrived at the penultimate day of Wimbledon in London.

She was accompanied by husband Prince William today but will attend the men’s final solo tomorrow.

William, as head of the FA, will be at the England Euro 2020 final at Wembley Stadium instead.

The duchess was all smiles as she took off her face mask and settled down to watch the action.

Who else was at Wimbledon today?

The All England Club becomes something of a celebrity hotspot for two weeks every summer, and this year has been no different.

Today, William and Kate were most certainly in good company.

And Kate was seen enjoying an animated conversation with tennis royalty Martina Navratilova.

Where royalty and tennis royalty mix.

Holly and Phil cause a stir at Wimbledon

This Morning hosts Holly Willoughby and Phillip Schofield were also at Wimbledon earlier this week.

However, their visit caused quite a stir among fans as the pair were pictured sitting directly next to each other.

Of course, on the ITV daytime show they have to keep two metres apart to stick to the show’s social distancing guidelines.

As a result, fans said their blood was boiling.

One commented on Holly’s post: “So why not sit together on This Morning? And please don’t insult our intelligence any more by saying that you can’t wait to hug and lick Phil’s face … you have been hugging all through this no doubt!”

Head to our Facebook page @EntertainmentDailyFix and tell us what you think of Kate at Wimbledon today.