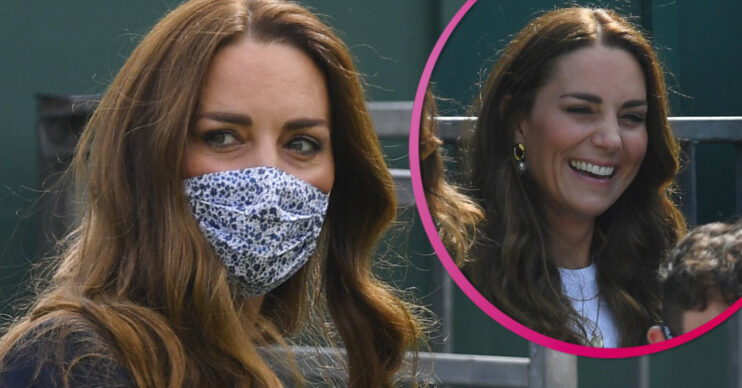 Kate Middleton stuns at Wimbledon as she arrives on day five

The Duchess looked gorgeous as always!

Kate Middleton arrived at Wimbledon today as she stunned in a navy outfit.

The Duchess of Cambridge attended day five of the tennis tournament as she joined retired British tennis player Tim Henman to watch a match.

What did Kate Middleton wear at Wimbledon?

The Duchess also wore a navy tailored blazer by Smythe over a plain white t-shirt.

She wore a matching mask, a pair of white heels and a white bag.

Kate was seen smiling and laughing as she sat to watch a match.

Is Kate a fan of tennis?

Yes, the Duchess is a big fan of tennis and has attended Wimbledon many times in the past.

Today, Kate will also visit one of the kitchens on the grounds.

She’ll hear from Executive Chef Adam Fargin about how the kitchens have been used by the AELTC over the past year to distribute 200 daily hot meals for the local community amid the pandemic.

Last summer, Kate teamed up with tennis legend Andy Murray as they surprised a group of schoolkids.

They took part in a video call.

During the call, Kate told the kids: “I’ve got a very important person here that’s going to come and join us, that would love to meet you guys and might be able to share some tennis tips as well with you.

“I’ll give you a few clues and see if you can guess who this special guest might be.”

After giving some clues, a pupil guessed it was Andy as he appeared on screen.

Kate asked: “Andy, have you got any tips for these guys if they want to take up tennis a bit more professionally?”

Andy replied: “The most important thing is to have fun.”