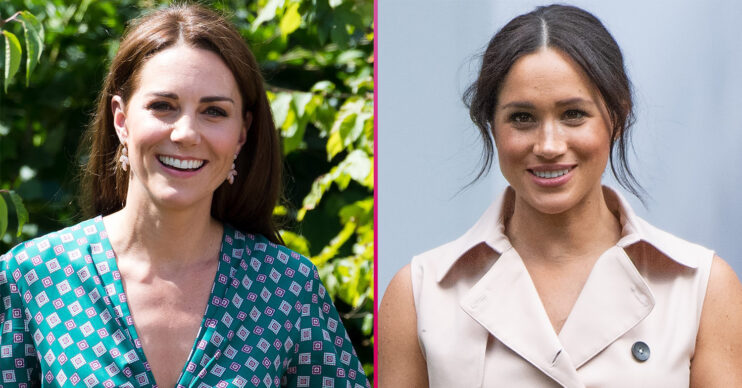 The pair seem to be bonding over Lilibet

Kate Middleton has reportedly been reaching out to Meghan Markle a lot more since the birth of Lilibet Diana.

The Duke and Duchess of Sussex welcomed their daughter Lilibet last month.

Now, sources say the Duchess of Cambridge has been sending “notes and gifts” to Meghan and Prince Harry to try and “build up a relationship”.

An insider told US Weekly: “Kate has been reaching out to Meghan a lot more since [Lilibet] was born, she’s sending [notes and] gifts and trying to build up a relationship.

“The firm has been instructing staffers to reach out more to Harry and Meghan to get them to soften a bit.”

During the Oprah chat, Meghan claimed Kate made her cry in the lead-up to her wedding to Harry.

They apparently had a dispute over flower girl dresses.

However, Meghan claimed Kate apologised and brought her flowers.

She told Oprah: “I don’t say that to be disparaging to anyone, because it was a really hard week of the wedding.

“And she was upset about something, but she owned it, and she apologised.

“And she brought me flowers and a note, apologising.”

Last month, reports claimed that Meghan had reached out to Kate to try and heal their ‘rift’.

An insider told Heat magazine: “Meghan’s fearful of losing her title, and the repercussions of Harry’s statements about the Royals in his recent Apple TV+ documentary with Oprah Winfrey.

“She’s secretly reached out to Kate, as she knows that the only hope they can have of smoothing things over with the family is to get Kate on their side.”