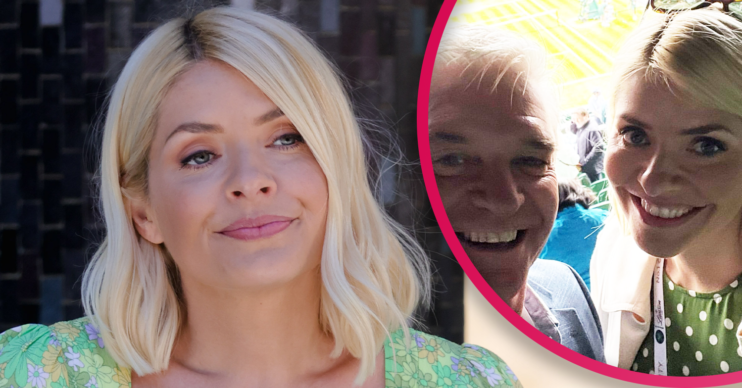 Why do they have to social distance on screen?

However, while she and This Morning co-host Phillip Schofield clearly had a blast, the pair did come under fire when posting pictures of the day on social media.

Earlier today (July 6), Holly shared a picture of herself and Phil sitting with husband Dan Baldwin in the stands at Wimbledon.

And, while some said it was lovely to see them sitting so close together, others slammed their day out.

What did Brits say about Holly Willoughby and Phillip Schofield attending Wimbledon?

Some bemused fans asked why they have to social distance on the TV yet can sit so close together at Wimbledon.

Others bizarrely branded them “criminals” for not wearing a mask at the outdoor event, while parents bemoaned the fact they’re unable to attend their kids’ sports days while the “evil elites” can enjoy a day at Wimbledon.

Read more: This Morning fans are all making the same Phillip Schofield joke as Holly Willoughby wears Pride skirt on the show

Uploading her selfie from the stands, Holly said: “Dreamy day at @wimbledon yesterday… strawberries and cream were seriously harmed in the process… thank you @champagnelansonuk for having us… Dress by @reformation coat by @lkbennettlondon bag by @mulberryengland.”

What was said about social distancing?

One angry follower questioned: “You have to sit 6ft apart on set for show but this is okay?”

Another was more forthright.

“Why do these TV people socially distance on set? It’s all just [bleep],” they said.

“I love how you have to sit 2 metres apart on the this morning sofa but at Wimbledon you can sit next to each other??” said another.

“So why not sit together on This Morning? And please don’t insult our intelligence any more by saying that you can’t wait to hug and lick Phil’s face … you have been hugging all through this no doubt!” another slammed.

“This crap just gets your blood boiling,” said another.

Others said that the rules “only apply to the poor”.

“One rule for one and a different for another. Disgusting, it’s a joke,” one said.

“Guess the rules only apply to the poor… THEY ARE LAUGHING IN OUR FACES!! WAKE UP PEOPLE!!!!!!!!!” declared another.

“Can’t go to children’s sports days but the rich and famous can go nibble strawberries and watch tennis,” slammed a third.

“Delete these evil elites,” slammed another. “I’m sick of the parading around like this when kids can’t have their parents at sports days. My blood boils.”

“They are taking the [bleep],” said another, before bizarrely calling the pair “criminals”.

However, others said it was lovely to see the friends and co-hosts enjoying some time together, and sitting next to each other.

One said: “Seeing you sat next to each other makes me so happy.”

Another hit out at the “COVID questioners”.

Quoting the entry conditions for Wimbledon, they stated that all ticket holders had to show “certification of a negative COVID-19 lateral flow test” or proof they had been double jabbed at least two weeks before attending.

Another added: “For everyone complaining that they can’t sit together on This Morning, but are here, firstly they don’t make rules re protocol regards This Morning etc. Secondly, Wimbledon is outside!”