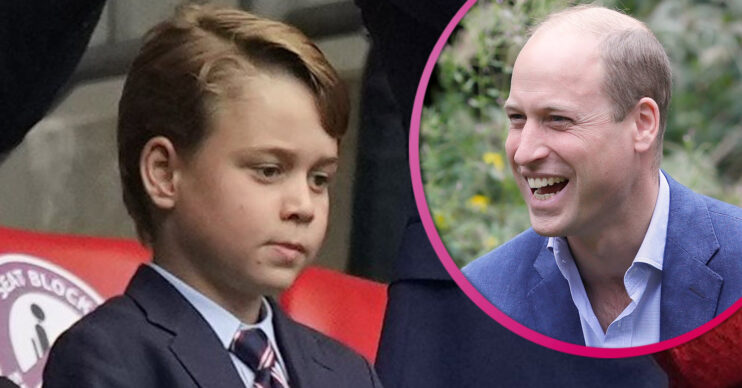 The seven-year-old made an appearance alongside his parents, Prince William and Kate Middleton.

George looked very smart for the occasion, wearing a black suit just like the Duke of Cambridge.

Many people wondered why George wore the suit, with some saying he shouldn’t have had to dress so formerly.

Why did Prince George wear a suit at the football game?

However, according to royal expert Duncan Larcombe, George wanted to wear the suit to be like his ‘hero’ dad William.

Mr Larcombe told OK! Magazine: “William would never have normally taken him to the football because it was an official outing in his role as president of the FA, but George absolutely begged to be allowed to come along.

“George idolises his dad. That’s why we saw him looking so smart in his suit – he really wanted to dress like William.

George thinks dad William is ‘most perfect person ever’

“He’s becoming a pretty big character and has both of his parents eating out of the palm of his hand.”

Mr Larcombe added that George thinks his dad is “the most perfect person on the planet”.

George stole the show at the game, with royal fans going crazy over his appearance on Twitter.

And royal commentator Charles Rae recently said we can expect to see more of the young royal at “fun type events”.

However, Mr Rae said the Duke and Duchess of Cambridge “will want to be careful that his public appearances will be carefully monitored”.

Mr Rae added to Entertainment Daily!: “We have already seen George, Charlotte and a Louis at family events but the England Germany game was his first big event and he looked as if he enjoyed himself.

“There has been a bit of criticism of the way he was dressed quite formerly, but if you looked in that VIP stand practically everyone was smartly dressed.

“I don’t think George looked out of place at all.”

George is third-in-line to the throne, after his dad William and grandfather Prince Charles.

Despite his age, reports claim that William and Kate have already told George that one day he will be king.

Battle of Brothers author Robert Lacey wrote in the book: “Sometime around the boy’s seventh birthday in the summer of 2020 it is thought that his parents went into more detail about what the little prince’s life of future royal ‘service and duty’ would particularly involve.”

What did you think of George’s suit? Head to our Facebook page @EntertainmentDailyFix and tell us.