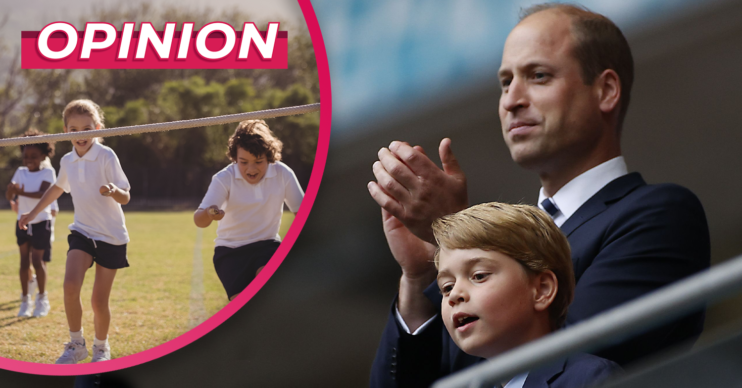 The ultimate 'them and us'?

And, while he no doubt looked cute in his suit as he sung the national anthem, the footage did – to me at least – look slightly hypocritical.

Now, don’t get me wrong, I love the royals.

The Cambridge kids, in fact, are my absolute favourites – and I think it’s lovely that George clearly had the time of his life at the footie with his parents.

But other parents aren’t being afforded that same luxury in the pandemic.

Prince George at Wembley: Why can’t we go to our kids’ sports days?

Numerous friends have told me that schools have put their foot down and scaled back their sports days and made them closed events.

So parents – who live in the same household bubble – aren’t allowed to attend.

It’s the same with leaving assemblies – mums and dads aren’t allowed to attend what is doubtless a milestone in the lives of both parents and children.

How is this fair?

Read more: Kate Middleton has told Prince George that ‘one day he will be king’

The royals should – and do on the whole – lead by example.

So why does it seem like one rule for them and another for us?

The Duke and Duchess of Cambridge are allowed to witness the sheer joy of watching their seven-year-old son at the football surrounded by 45,000 other people.

Yet us mere mortals aren’t allowed to watch ours win the egg and spoon race with a handful of parents.

Outdoors. Where we could distance. With members of our own households. With kids who are already mixing at school – without social distancing – every single weekday.

And I’m not the only one who feels this way.

Friends have been close to tears telling me they’re absolutely gutted to be missing out.

One look at Twitter shows parents feel much the same.

Little Prince George can go with his parents to watch a football game with thousands of other people in attendance. But normal parents couldn’t go and see their children at sports day. Its a bloody joke. One rule for them.

It reeks of a ‘them and us’ mentality

Will and Kate pride themselves on being relatable.

They’re pretty much single handedly responsible for bringing the monarchy into the 21st century.

Yet their decision to take George to the football comes across as selfish to me when other parents can’t go and stand in a field and watch their kids take part in sports.

Maybe the Cambridges aren’t aware of restrictions in many of our schools.

Perhaps my anger would be better aimed at Boris Johnson and his government?

The Cambridges are a sporty family and I can’t think that they would knowingly rub the fact they can attend large-scale sporting events in the faces of the British public when they can’t attend smaller ones involving their own children.

It just reeks of a “them and us” mentality to me – and that’s not something I thought the Cambridges were capable of.

At least, I really hope it isn’t…

What do you think? Head to our Facebook page @EntertainmentDailyFix and tell us your thoughts.