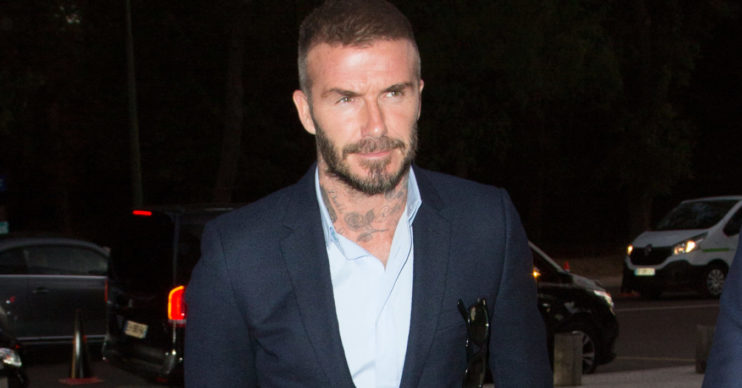 He called the Monarch an 'inspiration'

David Beckham has posted a heartfelt message to the Queen on her 94th birthday.

The 44-year-old shared a string of snaps of the Monarch with his 62.6million Instagram followers – and thanked her for being an “inspiration”.

Happy Birthday to our Queen. Now more than ever we are thankful for your leadership and for being an inspiration both in our country and around the world. We are so lucky to have you. @theroyalfamily ♥️

Alongside the photos, David wrote: “Happy Birthday to our Queen. Now more than ever we are thankful for your leadership and for being an inspiration both in our country and around the world.

“We are so lucky to have you. @theroyalfamily ♥️.”

David and wife Victoria are known for having close connections with members of the royal family.

They previously attended the wedding of Prince William and Kate in 2011, and were guests at Prince Harry and Meghan Markle’s 2018 nuptials.

Read more: Queen’s birthday: Call for Brits to sing Happy Birthday on their doorsteps as she turns 94

The couple have also met the Queen at Buckingham Palace.

Earlier this year, David admitted he was “proud” of Harry following his decision to step down as a senior royal.

Speaking to Entertainment Tonight Online, David said: “I haven’t spoken to Harry about him moving. We speak as friends and that’s the most important thing for me.

“I think he’s enjoying being a young father for the first time and that’s what we always spoke about. When you are a parent it changes everything for you. He always needs to be happy.

“We love him and he’s an amazing person – and that’s the most important thing. But I’m proud to see him growing up as an individual ad being that person every father wants to be.”

The former footballer added: “Every father wants to be loving to their children and that’s what I see with him”.

David’s tribute adds to the long-list of touching messages the Queen has received today.

The Royal Family’s Twitter account also shared a collection of snaps, writing in the caption: “Head of the Commonwealth, Head of the Armed Forces, Head of State in 16 countries and the longest reigning Monarch in British History.

Our Queen 💚 I want to thank everyone on the NHS front line, as well as care workers and those carrying out essential roles, who selflessly continue their day-to-day duties outside the home in support of us all… The pride in who we are is not a part of our past, it defines our present and our future… We will succeed – and that success will belong to every one of us. We should take comfort that while we may have more still to endure, better days will return: we will be with our friends again; we will be with our families again; we will meet again… 💚 @theroyalfamily 🇬🇧

While Prince William and Kate gave a rare glimpse into family life with the Queen as they wished her a happy 94th birthday on Instagram.

Leave us a comment on our Facebook page @EntertianmentDailyFix and let us know what you think of this story.