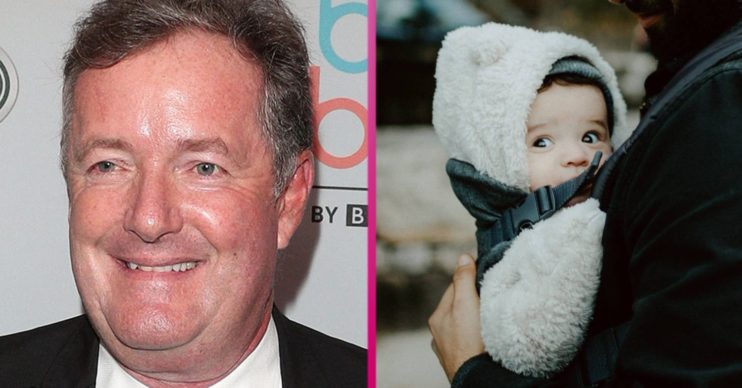 As he laid into the Prime Minister

Piers Morgan has dismissed claims he used a ‘racist’ term on Twitter in a baby carrier debate.

The Good Morning Britain presenter, 55, was accused of using an “outdated” word as he laid into the Prime Minister.

Piers was slamming Boris Johnson for his fathering skills when another social media user suggested his terminology was incorrect.

And author Sarah Ockwell-Smith doubled down on her accusation, insisting Piers’ choice of words was racist.

What did Piers Morgan say in the baby carrier row?

TV host Piers made the initial comments as he shared an image of PM Johnson on his Scottish holiday.

The picture showed him out walking and carrying his baby son, Wilfred.

Piers seemed to object to the PM wearing a baby carrier to do so – and linked it to Johnson’s alleged incompetence during the coronavirus outbreak.

He wrote: “Least surprising news of the Millennium: the man whose woeful handling of the pandemic crisis has been so pathetically weak… needs a papoose to carry his baby.”

She also supplied a Wikipedia link to evidence her claim. Sarah continued: “The correct terminology is a baby carrier (or sling if it is a non-structured carrier).”

An exasperated Piers replied: “Why are wokies so exhausting? It seems a contradiction in terms.”

However, in response to Piers’ reply, Sarah indicated she was glad he’d helped get her message over to a wider audience.

She wrote: “Thanks for amplifying the message!”

However, Piers maintained he was in the right.

“All I amplified was your absurd virtue-signalling,” he fired back, adding: “A papoose is not racist.”

Sarah, however, did not let Piers have the final word on the matter. She insisted: “Your usage of the word is racist.”

And as the argument continued to circle, he replied: “No, your attempt to make it racist is in itself… racist.”

It isn’t the first time Piers has objected to men making use of a baby sling to carry their children.

Last summer he slammed Gordon Ramsay as a “papoose-carrying numpty” after the celebrity chef shared an image of himself looking after baby Oscar on Instagram. He has also ranted about how he believes them to be ’emasculating’ on Good Morning Britain.