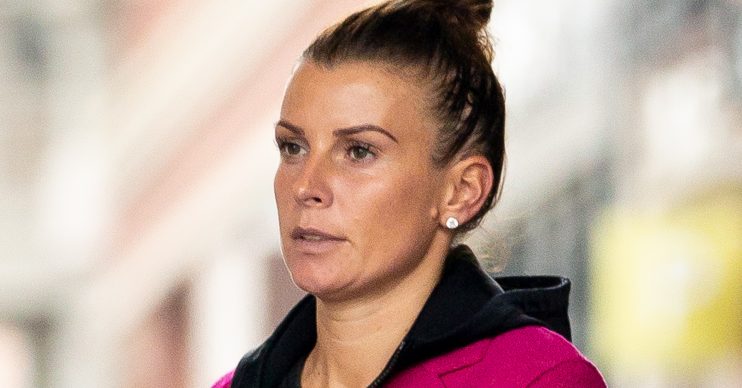 She's waiting for him to return from the US

WAG Coleen Rooney has been spotted without her wedding ring just days after footballer husband Wayne was pictured on a night out with a mystery woman.

The mum of four’s left hand appeared bare as she went shopping while waiting for Wayne, 33, to return from the US.

In pictures published by the Mirror, Coleen, 33, left her car to pick up some groceries and looked downcast during a chat on the phone.

It follows a report in The Sun containing photos that showed the former Manchester United star speaking to an unknown woman at around 5.30am as they waited for a lift together.

According to the publication, Wayne was laughing and joking with the brunette after several hours of partying with his fellow D.C. United team mates.

It reported that Wayne’s night out included rum and cokes at two clubs, conversations with three girls and a soak in a pal’s Jacuzzi.

It comes weeks after reports claiming Coleen might want to grow their family – despite the WAG ruling out having any more kids in an interview with OK! magazine earlier this year.

She is already mum to four boys with Wayne, but a source recently quoted by The Sun said she’s looking to add to her brood now that she’s moved back to the UK, ahead of Wayne’s stint with English club Derby County in the new year.

They told the publication: “[Coleen] has always loved being a mum and still feels their family could expand further once they’re back. It wasn’t feasible in the US but when they return, another baby is a definite possibility.”

And despite the couple’s well-documented marriage troubles, Coleen is said to have always considered Wayne a “great dad”.

First year of school in America all done. So proud of my boys ❤️

The source continued: “She has always felt that whatever Wayne has put her through in their marriage he is a great dad, and being good parents together is their strongest asset.”