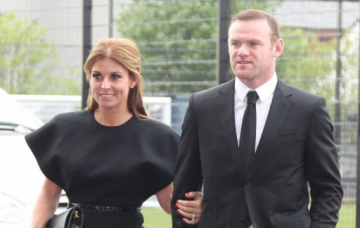 She and Wayne are now the proud parents of four

Coleen Rooney has shared her joy with fans following the arrival of her fourth child earlier this morning.

She welcomed the baby – a healthy and beautiful boy – and seemingly headed straight to Twitter to pass on the exciting news with her followers shortly before 6am.

The tot already has a name – Cass Mac Rooney.

Supporters of Wayne and Coleen will know this is a break in tradition for the couple: their three older sons all have names beginning with a ‘K’.

Their eldest lad is Kai, eight, who was followed by Klay, four, and then Kit, who is two.

The 31-year-old uploaded a photo to Twitter of Wayne, 32, and their three young sons standing outdoors.

Coleen added the caption: “Happy Valentine’s Day to my Boys… have a good one everybody.”

In the snap, Everton and England player Wayne is seen holding the couple’s youngest son Kit,  while Kai and Klay stand next to him.

Childhood sweethearts Coleen and Wayne went through a tough patch last year when the footballer was caught drink-driving as he drove another woman home in the early hours of the morning.

It led to speculation the couple’s marriage was on the rocks, fuelled when Coleen was seen out and about without her wedding ring.

However, in a rare and very defiant public statement last November, pregnant Coleen set the record straight saying things weren’t perfect between them but they were still together.

“I’m not saying everything is fine and forgotten about, but we are as good as can be at this point.

“I’m not the type of person to put a show on and say we’re all loved-up… I’m just real.”

Explaining why she removed the wedding ring, the mother of three admitted she wasn’t keen on wearing what she saw as a “sign of commitment” when things were shaky between the couple.

But now it’s back on her finger – unless she’s at the gym or running errands.

“It didn’t feel right wearing my ring, I see it as a sign of commitment and I was unsure what was happening,” she said.

“I don’t always wear my ring day to day, especially when I go the gym which is where I get stalked by paps each morning.

“So, if I don’t always have it on, maybe it’s just because I’m going the gym or haven’t put it on before the school run!!”

She went on to thank fans for their support and also hit back at people who think she’s “stupid” for giving Wayne another chance.

“A few people have been feeling sorry for me, please don’t. I appreciate getting cared about, however, I am a strong person, I don’t feel sorry for myself.

“Also a few people are probably thinking I’m stupid for staying in my marriage. I am not stupid, I know my own mind and it’s something I want to try and work on.”

Coleen also stressed that despite the rumours, she and Wayne never separated during the last few months.

“Before the headlines start…. No, I’m not taking Wayne back as he’s never left. Yes, it has been a [bleep] time, and yes, time was spent apart and I thought my marriage might have been at an end.”

Wayne was pulled over by police in Cheshire in the early hours of September 1 while driving a VW Beetle owned by office worker Laura Simpson, who was in the passenger seat.

Coleen said: “In life, you don’t know what’s going to happen tomorrow. But one thing I do know is that too much alcohol on a night out is a dangerous and a lot of stupid mistakes are made and things are said under the influence.

“I would never trust ANYONE who has had a lot of alcohol, it changes some people drastically.”

She went on to accuse Wayne of making a “silly and selfish mistake” – and boldly admitted she’s not quite ready to start gushing about his good points just yet.

“Wayne doesn’t get portrayed for the person he is in the press, he has always had a hard time. I’m not going to list his good qualities as a person as I don’t think he deserves it at this time but one thing is that he is a brilliant dad,” she wrote.

“He’s made silly and selfish mistakes, some he’s learnt from, some obviously not. However maybe that will change?”

He was banned from driving for two years and handed 100 hours of unpaid work as part of a 12-month community order following his drink-driving arrest.

The couple married in Italy in 2008 and are expecting a fourth child soon.

What do you think of the name ? Leave us a comment on our Facebook page @EntertainmentDailyFix and let us know!