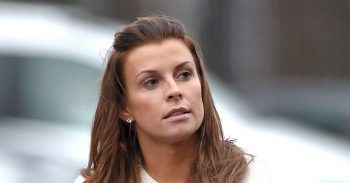 Coleen Rooney hits back at criticism over photo of her sons

The WAG was at a football tournament with her four sons

Coleen Rooney has hit back at critics who said that she should “set an example” when it came to looking after her kids.

The mum of four admitted she was flying solo with husband Wayne away, so she and her sons all had to go along to eldest son Kai’s football tournament.

And, while the nine year old was busy on the pitch, Coleen had the not-so-easy task of keeping Klay, six, Kit, three, and 15-month-old Cass entertained.

Posting a picture of the boys glued to their iPads, Coleen said: “Kai’s football (soccer here) tournament set up!!! When Dads away… we all have to go along [sic]!!”

However, the family shot was quickly met with criticism from some Twitter users. One posted: “Let technology look after the kids while mum is posting on social media.”

Another blasted: “And none of them are watching the sport just screens, how sad.”

A third added: “Very unhealthy for kids and the environment, set an example Coleen.”

Clearly fed up of the criticism, Coleen hit back. She told followers to “calm down” and said: “Yes my children have and use iPads!!!”

She added: “And even my 15 month old watches Peppa Pig on one would you believe!!”

Revealing that the boys weren’t just playing on the tablets, Coleen went on to tell fans that they “come in handy sometimes” and “can be very educational”.

She added: “Mathletics and spelling apps are used all the time by Kai and Klay… check them out.”

Fans of the WAG, who recently moved to Washington when Wayne signed for football team DC United, were quick to jump to her defence, revealing that their kids “would be on iPads as well”.

They added: “5-6 hours at a football tournament with one kid who isn’t playing is bad enough, but 3. At least all sat in one place and not running in 3 diff directions [sic].”

“Whatever makes them happy & calm,” another said, adding: “High 5 mama!”

Supernanny star Jo Frost also backed Coleen and said: “They do come in handy for parents looking 4 a quick bit of relieve n also can b educational as well as entertainment [sic].”

Replying with the raising hands emoji, Coleen said: “Tbh my little ones don’t want to spend much time on them anyway!!! 3 brothers and mum and dad in the house… what better way for interaction than with each other [sic].”

And, for anyone wondering just how Kai’s team did in the tournament, the soccer mum revealed that he is following in his dad’s footsteps and won.

She posted a proud picture of her eldest holding a pretty impressive trophy aloft.

What do you think of keeping kids entertained on iPads and tablets? Head over to our Facebook page @EntertainmentDailyFix and let us know!