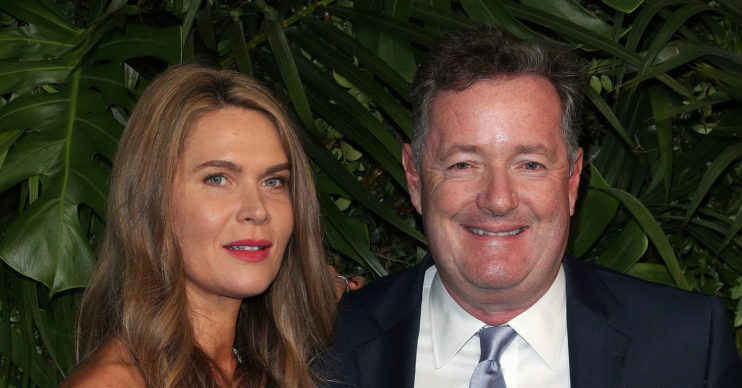 Celia Walden responds to Piers Morgan anniversary tribute: ‘We are so not that couple’

The journalist, 44, shared a throwback photo of her with hubby Piers, 55, on social media.

Taken on their wedding day 10 years ago, Celia and Piers are beaming back from their vintage car.

She teasingly wrote that even though there are some amazing couples that make history each century – she and Piers aren’t one of them.

She wrote in view of her some 20,300 Instagram followers: “Once every century the perfect couple comes along and redefines the way other couples view love.

“We are totally not that couple. Happy 10th anniversary, Piers.”

Many of her followers appeared to love her cheeky commentary.

Another user gushed: “You are one lucky lady to be married to this guy – even if he is punching.”

A third user posted: “You both are looking absolutely incredible,Congratulations Happy Anniversary Piers and Celia.”

And a fourth user praised: “Happy Anniversary. You look stunning. Love your flowers.”

Meanwhile, Piers posted to his some 1.1 million Instagram followers a stunning wedding snap of the couple.

Once every century the perfect couple comes along and redefines the way other couples view love. We are totally not that couple. Happy 10th anniversary, Piers.

Sharing just days prior, the pair as shown gazing lovingly at one another as they stroll in the countryside.

Piers wrote: “10yrs ago today… I made an honest woman of Celia. And her lawyers hoped it would never last! Happy Anniversary to my considerably better half.”

“I made an honest woman of Celia”

Read more: The Chase fans call for Shaun Wallace to be sacked

Eamonn Holmes remarked that he married Ruth Langsford on a similar date.

He wrote: “And to think we were doing exactly the same thing in the same week 10 years ago.”

The couple married in June 2010, and they share one daughter together, Elise, eight.

This is Piers’ second marriage, and he has three sons from his first marriage to Marion Shalloe.

“All divorces are deeply unpleasant”

The GMB star spoke of his divorce in an interview with Daily Mail in 2009. He claimed he was able to remain on good terms with Marion.

He said: “The divorce was a pretty horrendous experience – all divorces are deeply unpleasant.

“The day Marion and I got divorced, I said, ‘You know what? We can both go away feeling awful about this, but let’s never mention it again’.

“I don’t regret it because these things happen, but I’m pleased that we’ve stayed good friends, because it’s important for your kids.”

What do you think of Celia’s response? Share your thoughts with us on our Facebook page @EntertainmentDailyFix.