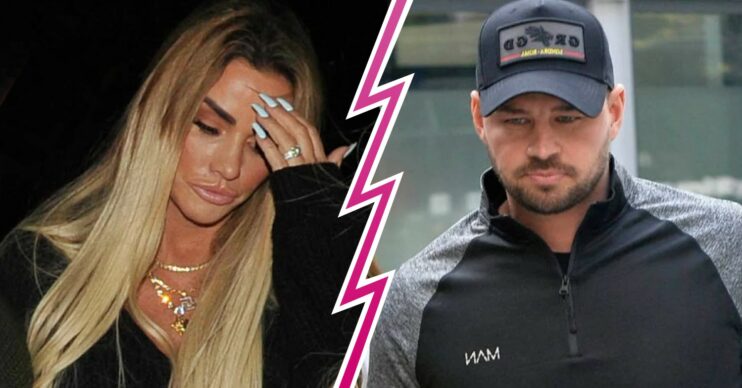 Is her engagement off?

Carl Woods has taken to Instagram to deny he has split from fiancé Katie Price again.

According to The Sun, a new chapter in the saga that is Katie’s life is unfolding following allegations she and Carl argued during their recent trip to Thailand.

The news outlet reckons Katie told strangers she is a single woman again as she enjoyed a night out in Brighton.

Furthermore, The Sun reports Katie was snapped yesterday (Friday July 29) without her diamond engagement ring on her finger.

However, Carl has subsequently denied a break up in a furious tirade on social media.

An unnamed onlooker apparently told the tabloid that mum-of-five Katie revealed she ended things when she and Carl returned home.

That source reportedly said: “Katie was letting her hair down and telling people that her engagement with Carl was over.

“She said that the couple had been rowing non-stop on holiday and things had come to blows with her deciding to call it a day when they returned home.

“Those close to Katie hope it is over for good after their rocky romance has taken its toll on her.”

Those close to Katie hope it is over for good.

ED! has approached representatives for Katie Price and Carl Woods for comment.

By mid-afternoon on Saturday, Carl provided his perspective as he shared a rant on his Instagram Stories about the story.

Telling followers he was ‘still at Katie’s house’, he raged: “All of this ‘we want shot of him’… why don’t you all [blank] off?”

“You want to know the truth? I’m the best [blank]ing fella she’s ever had.

“I’m the one that suffers the [blank], no-one else.

“I’m on the front line, I suffer the [blank] and I’m the one that helps her, no-one else.”

He continued: “No we haven’t broken up, I’m still at her house so [blank] off with your [blank] because you know nothing.”

Minutes later, a little calmer, Carl added: “The truth is I deserve recognition for what I do. And I get nothing.”

Carl got down on one knee and proposed to Katie in April 2021. As well as asking her mum for Katie’s hand, Carl also apparently sought permission from Katie’s second son Junior Andre.

Katie reportedly told OK! magazine at the time about her engagement: “We’d spoken about it a lot, so I knew he was going to, I just didn’t know when.”

It is believed Carl became Katie’s eighth fiancé when she accepted his proposal. And reports claimed he splashed out £50,000 on her ring.

However, there were also reports back in March of this year that suggested the couple called time on their romance after ten months of dating.

The Sun quoted an anonymous pal as saying at the time: “It’s been a difficult couple of months and their ongoing court cases have just added even more stress to the situation.

Within weeks reports claimed the pair were ‘back on’.

Who has Katie Price been married to?

Katie’s first husband was Peter Andre between 2005 to 2009. They share two children – Junior and Princess – together.

Read more: Katie Price returns to Instagram as she declares ‘this is me at my happiest’

Since her relationship with Kieran – but before meeting Carl – Katie also squeezed in an engagement to Kris Boyson.