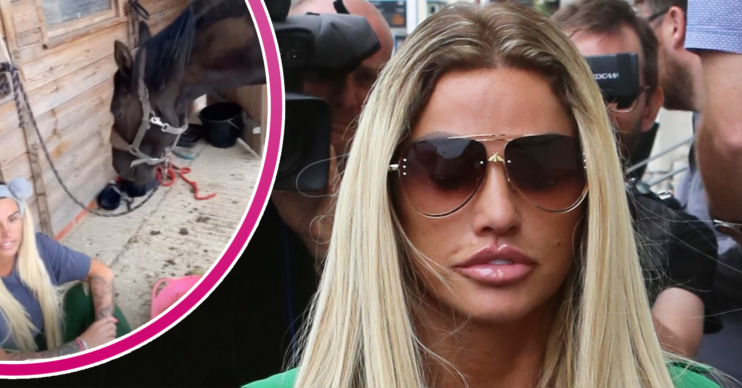 She announced she was having a break from social media

Katie Price has been spotted on social media “at her happiest” after announcing she was “taking time off for personal reasons”.

Although not on her own personal page, Katie’s fiancé Carl Woods, 31, posted a video showing Katie declaring she is at her “happiest”.

In the short clip, which was shared on Carl’s stories, she can be seen sitting on the floor.

Next to Katie, 42, is Carl’s pet dog Sid, while on the other side, one of her beloved horses can be seen eating from a bright pink bucket.

Katie declares: “This is me at my happiest, Thursday evening by the stables feeding my horses.”

Carl then jokes: “These things [bleep] me up.”

Moving the camera to show the horse, he says: “Not you, Sid. These!”

It comes after Katie told her followers that she would be taking time off social media.

Mum-of-five Katie made the shock announcement on July 7, posting on both Twitter and Instagram to update her fans.

Her post read: “I will be coming off all social media for a period of time.

“I need to take time off for personal reasons.

“Thank you to all my loyal fans for always supporting me.”

Former glamour model Katie turned off the comments, but followers were still able to reply to her tweet – not all of them were supportive.

A rocky time for Katie Price

Katie has had a bit of a rough time lately.

She narrowly avoided prison time again, after admitting to breaking a restraining order.

She sent an abusive text to her ex-husband Kieran Hayler‘s fiancée, Michelle Penticost.

The restraining order, issued to Katie in 2019, states she couldn’t contact Ms Penticost directly or indirectly.

But Katie allegedly sent an abusive text to her ex-husband

In it, she reportedly described his fiancée Ms Penticost as a “gutter [bleep]”.

In May, she pleaded guilty to the alleged offence during a hearing in court.

On June 24, Katie appeared in court for her sentencing.

She avoided going to prison, but received an 18-month community order to carry out 170 hours of unpaid work.