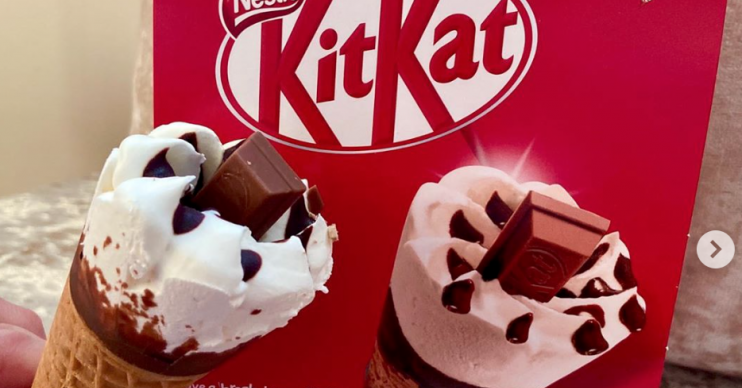 There's also a finger of KitKat stuck in the top…

Nestle has launched new KitKat Ice Cream Cones and they look just like a Cornetto, but with a finger of KitKat placed in the top!

The ice creams were spotted on sale in Iceland by foodie blogger NewFoodsUK.

The blogger also revealed that the cones cost £2 for four – so just 50p each!

They told ED!: “They were really nice. The chocolate sauce that was on the top also tasted like KitKat!”

KitKat fans most certainly welcomed the news of the launch, with one commenting with many love heart eye emojis.

Another simply said: “Oh my God!”

“Let’s go to Iceland,” another declared.

Read more: KFC reopens some stores for delivery only

“I want some of these,” said another.

They were really nice. The chocolate sauce that was on the top also tasted like KitKat!

“Lidl has got the stick versions in for £2 currently,” they reported.

The ice creams on sale at Lidl look more like Magnums, with vanilla ice cream covered in milk chocolate with that trademark KitKat wafer running through the shell.

“So many new foods out now,” commented another with the love heart eyes emoji.

Indeed, the news of the new KitKat launch comes hot on the heels of the release of M&S’s new Percy Pig Ice Cream.

The ice cream has that “unmistakable” taste of grape and raspberry, plus to make it even more Percy, strawberry marshmallow runs through the tub.

However, if you don’t fancy a trip to the shops during the pandemic and can’t order online, Holly Willoughby has another idea.

She helped her nine-year-old daughter Belle make her own ice cream cake for her birthday earlier this week.

Reporting back… Ice cream cake was a success! Belle is super happy with her birthday creation… and we are super happy to have such a ray of sunshine in our life… Happy birthday beautiful Belle… keep being you… just as you are… we LOVE you! 💓🌸🍦🦄🎀🌷🦩🧁🍬🎂💕💘💖

Holly and Belle took a Swiss roll and sliced it up, and layered it in an old ice cream carton with raspberry ripple ice cream.

The pair topped their homemade creation with sweets including mini Percy Pigs and Percy & Friends.

Head to our Facebook page @EntertainmentDailyFix and let us know if you’ll be trying the new KitKat cones.