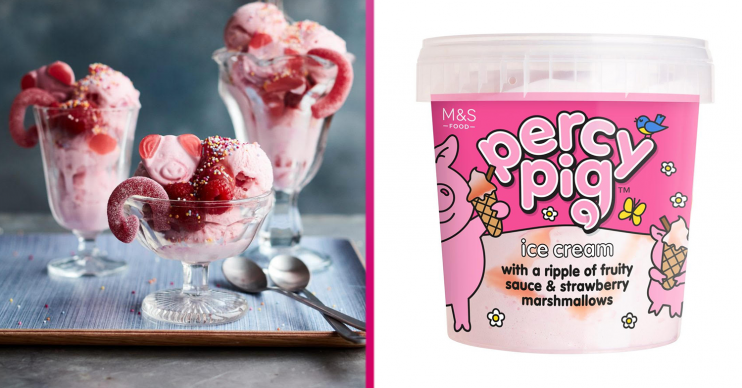 It's in store now!

Foodies have reacted with glee at the news that Marks and Spencer has launched a tub of Percy Pig-flavour ice cream.

The ice cream has that unmistakable Percy Pig flavour of raspberry and grape.

Plus the addition of strawberry marshmallow gives the ice cream a soft chewy texture, much like the sweets.

For fans of Percy Pig Dessert Sauce, you’ll find a ripple of that running through the ice cream.

M&S said: “It’s what Percy dreams are made of.”

It costs £3 per 453g tub and therefore, in our opinion, a total steal!

M&S rep April Preston explained: “Customers have been asking us for a Percy Pig ice cream for a long time now, therefore we’re very pleased to be able introduce one at a time when we could all use a little pick me up.”

She added: “Percy Pig is loved by so many, so when we develop a new Percy product, we have to ensure every element of the flavour and texture is synonymous with what our loyal fans expect.”

Whether it’s movie night or time for a sunny picnic in the garden, NEW Percy Pig ice cream is sure to bring a smile.

She also explained just how she eats hers.

April revealed: “I love two scoops with an extra sprinkling of mini marshmallows on top and a good rom-com.”

Posting to Instagram, M&S shared the news with shoppers.

It said: “Whether it’s movie night or time for a sunny picnic in the garden, NEW Percy Pig ice cream is sure to bring a smile.”

And the store most definitely wasn’t wrong, with Percy fans commenting on the post in their droves.

One fan tagged her pal and asked if the ice cream was considered “essential”.

Others commented on the styling of the picture.

In the shot, the ice cream has been scooped onto a waffle cone and drizzled with the dessert sauce.

“Looks amazing with the sauce,” said one.

“My girls are going to love this,” one mum commented.

Somehow, however, we don’t think the girls are going to be the only ones…