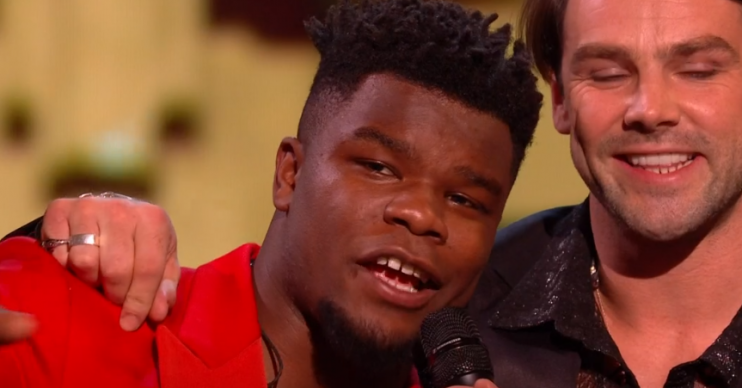 He had nothing but respect for the victors

Rugby ace Levi Davis was forced to hit back at members of the audience on The X Factor: Celebrity as they turned on girlband V5.

At the end of Saturday’s (23.11.19) episode, group acts Try Star and V5 found themselves fighting for their places in the competition in the Sing Off.

After both groups sang their hearts out, V5 were saved while Try Star members Thom Evans, Levi Davis and Ben Foden were eliminated at the home stretch.

Host Dermot O’Leary approached the lads to get their take on the result, which must have been disappointing for them – given the positive reactions their initial performance got from the audience, judges and viewers at home.

Dermot held the mic to Levi, who could barely be heard over a crescendo of angry boos from the furious crowd.

“It’s been amazing. We literally cannot thank you guys enough,” Levi said, struggling to speak over all the noise.

Offering a few kind words to the victors, he added: “V5 are awesome guys, it’s been great…”

Levi then hit back at the audience and called for the boos to stop.

Trying to placate the angry crowd, which continued to flood the arena with boos, he continued: “We love it. They’re great. We’ve had a great experience. It’s been amazing.”

Elsewhere in the penultimate episode of the series, viewers were baffled by Nicole Scherzinger‘s voice.

A number of fans of the show on Twitter thought the former Pussycat Doll sounded completely different to how she normally speaks when she sits on the judging panel.

Nicole wasn’t the only judge to leave viewers scratching their heads, as Simon also caused a stir with his appraisal of actor Vinnie Jones’ performance.

The former footballer put on a well and truly explosive semi-final show, shouting (I’ve Had) The Time Of My Life from the film Dirty Dancing as he pranced around the stage.

Viewers branded it an “assault” on the ears but Simon spoke positively about the performance – and was so at odds with fans that some even called for him to be ‘banned from TV’.

Are you looking forward to the final? Leave us a comment on our Facebook page @EntertainmentDailyFix and let us know what you think.