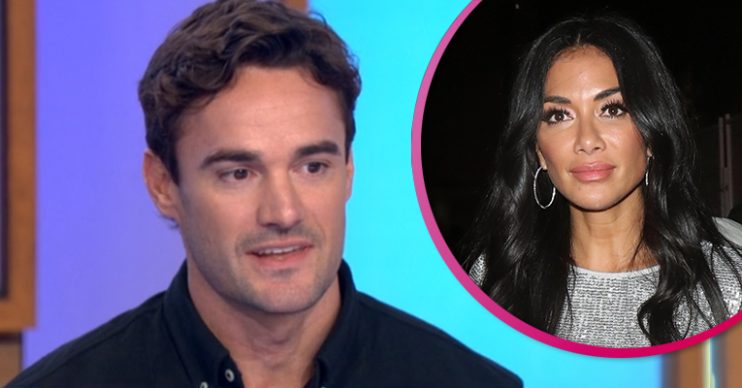 He tried to dodge the questions

Earlier this month, it was claimed the pair had enjoyed a romantic evening with each other in London with a source saying X Factor: Celebrity Thom was “smitten early on”.

The rugby player was grilled on the rumours on today’s Loose Women and he remained very coy.

While discussing the talent show, Jane Moore asked: “Thom I’ve been reading the papers and there’s been a little bit of extra frisk on with you… Nicole.”

His bandmates Ben Foden and Levi Davis waved their hands and said: “Ooooh.”

I mean who wouldn’t want to date Nicole, she’s lovely.

Thom said: “Look Nicole is lovely and I… uh… I’ve been focusing on the programme and the finals.”

Jane asked: “What about after the finals when it’s all done?”

Levi joked: “Then we’ll be focusing on the music industry,” as Thom said: ” Yeah. I mean who wouldn’t want to date Nicole, she’s lovely…”

Ben cut in: “Who wouldn’t to date Thom, he’s lovely,” to which Thom joked: “I actually paid Ben to say that.”

It comes after an insider spilled details of Thom and Nicole’s reported romance.

He recently revealed that he’s on a sex ban because he doesn’t want any distractions while performing on X Factor: Celebrity.