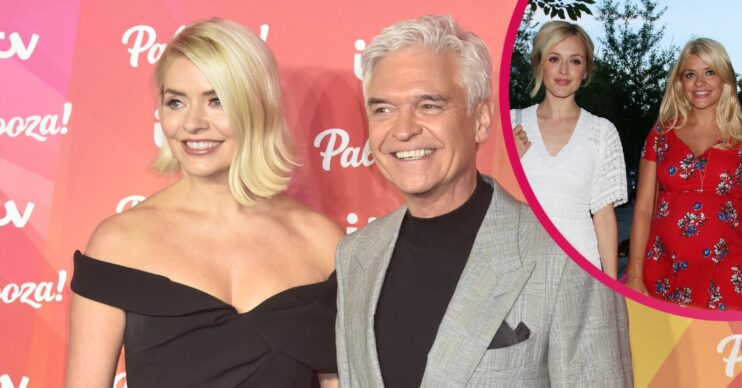 Holly Willoughby’s circle of friends is more tight-knit than Taylor Swift’s – and that’s saying something!

The beloved presenter fronts This Morning with one of her besties, Phillip Schofield, and away from the ITV show, they share nights out and holidays.

But who else is she friends with?

Here’s what we know about Holly’s close-knit friendship circle.

Who are Holly Willoughby’s friends?

Holly Willoughby has a close friendship group with four gorgeous gals, and she is often seen posing in Instagram pictures with them.

They’re her gang of go-to mates for girls’ holidays and boozy nights out.

The women are often seen out for long lunches, accompanied by a glass or two of wine.

Christine Lampard has also been known to join them.

Are Holly and Fearne Cotton friends?

The blonde duo have been best friends since they met presenting children’s TV at age 17.

The pair also went on to present their own show called Holly & Fearne Go Dating, where we could see their friendship blossom even more.

Unfortunately, as time went on Holly and Fearne began doing their own stuff and started to grow apart.

Fearne and I have that sort of friendship where we’re always so busy that when we see each other we can pick up where we left off.

However, the best friends didn’t let that be an issue.

Holly told the Mail: “Fearne and I have that sort of friendship where we’re always so busy that when we see each other, it’s great and we can pick up where we left off. There is no guilt, no resentment.”

Holly shocked fans when she revealed that she was related to EastEnders actress Tamzin Outhwaite.

When Tamzin appeared on This Morning, Holly talked about her appearance on The Masked Singer, which Holly guest-judged.

She said: “I loved you so much in that.

“I clearly didn’t get who you were, which is slightly embarrassing bearing in mind we’re practically related. Sorry about that.”

Holly and Tamzin refer to one another as cousins, but they are actually cousins-in-law, as Holly’s husband Dan Baldwin and Tamzin are cousins.

Holly and Phil have remained good friends both on and off camera.

The pair have been working together for 10 years, hosting ITV’s This Morning together.

Phil even said on their This Morning show that Holly is the “sister I never had”.

In an episode of Loose Women, Holly also said: “We spend so many hours together, then when we’re off in the summer, we spend a lot of time together.

“We just get on quite well. We think in the same way.”

Holly and Bradley have become good friends, from their many mutual appearances on This Morning and Play To The Whistle.

Fans say the pair have really good chemistry together.

They’re now a TV duo as they reunited for their new series Take Off With Bradley And Holly.

In 2017, Holly, Bradley and Phil also took a trip in the summer together.

Phil captured the scenes on his Snapchat, which showed their group downing shots after a meal.

Emma Bunton is a former Spice Girl and mum of two.

She also hosts her own show on Heart FM.

Holly and Emma met on Celebrity Juice where they created their own comedy girl group with Fearne Cotton called The Catflaps.

The pair have been friends for years and feature a lot on each other’s social media.

Shiarra is a head of artist relations at Universal Music and wife of Andy Bell.

She is also one of Holly Willoughby’s closest friends.

A source told The Sun: “Shiarra is from the old-school music industry and met Nicole Appleton and Emma Bunton back in the 90s when she was a junior and they were hitting the big time.

“She parties hard with the rest of them but is a shoulder to cry on and has the best advice.”

Nicole Appleton is most known for singing All Saints but she is also one of Holly’s best friends.

She was one of the first people Holly met after the lockdown restrictions were lifted.

Holly got close to Emma and Nicole on a girls trip to Ibiza, which followed Nicole’s divorce from Liam Gallagher.