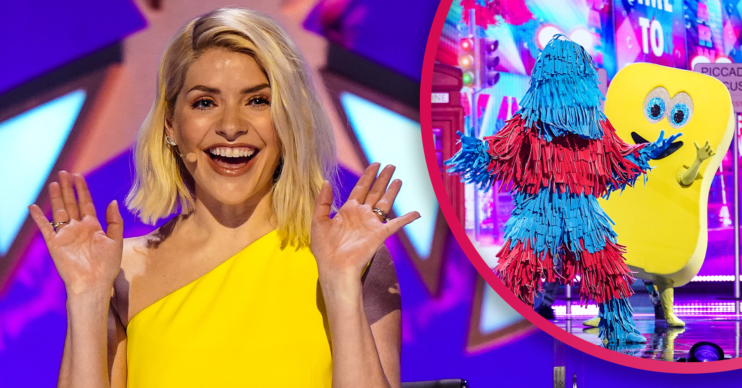 The This Morning host was left a little red-faced

Holly Willoughby appeared on the final of The Masked Dancer last night (June 5) and looked gorgeous in head-to-toe yellow.

That is until Carwash appeared dancing alongside two yellow sponges.

As he took to the stage for his first performance, Holly declared: “Oh my god I look like a sponge!”

What did Holly Willoughby wear on The Masked Dancer?

However, Holly was left a little red faced as Louis Smith – who was later unveiled as Carwash and crowned the champion – danced onto the stage.

Standing up to dance along, Holly suddenly realised she looked like one of his backing dancers who were also dressed in head-to-toe yellow.

Except they weren’t wearing a designer dress, they were in fancy dress sponge costumes.

Holly pokes fun at her outfit

After the show, Holly posted her outfit details up on Instagram.

After paying tribute to the dancers, including her relation Tamzin Outhwaite, Holly again poked fun at herself.

She said: “Who’s that behind the mask… hope you enjoyed the show tonight… can’t believe I didn’t get @glamzin … so so proud of her!!!! Also congratulations to @louissmith1989 for being an epic champion! 💃🏻 🕺🏻 🎭.

“Thank you to the whole @themaskeddanceruk team for allowing me to come and play.”

She then added: “Dress by @alexperryofficial And Jewellery @stephenwebsterjewellery 💛 #sponge.”

What did Holly’s followers say?

Her stylist Danni Whiteman was one of the first to comment, laughing at Holly’s hashtag.

However, no one else was laughing at Holly’s expense.

In fact, her fans commented that she looked entirely gorgeous.

I wish you took a photo with those two sponges!

“Seriously, who else could pull off a yellow dress like this?” said one.

“You look amazing Holls, you really suit that colour,” said another.

However, one fan did comment that Holly missed a trick.

They said: “I wish you took a photo with those two sponges!”