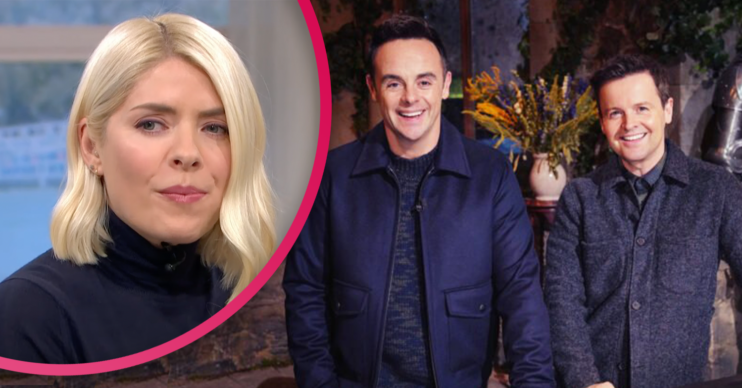 The host has been off air for two days

This Morning fans are convinced Holly Willoughby is heading into the I’m A Celebrity castle.

Holly has been absent from the ITV daytime show for two days, with co-host Phillip Schofield explaining she has a tummy bug.

The blonde presenter herself has also taken to Instagram to reveal she’ll be back when she can promise she won’t be sick on her co-host Phil.

However, viewers aren’t entirely convinced that sickly Holly is telling the truth.

What have This Morning fans said about Holly Willoughby?

This Morning fans have claimed it’s a bit of a coincidence that Holly is off work the same week the stars are isolating ahead of I’m A Celebrity.

And some have even jumped to the conclusion that Holly will be heading into the castle as a “wildcard”.

One said: “Another day with no Holly on #ThisMorning … the same week that celebs are isolating for #ImACeleb,” adding the detective emoji.

“@Schofe is @hollywills not on @thismorning just code word for Holly going into #ImACeleb last min?” they asked.

“She could be a wildcard what no one knew about,” another speculated.

Of course, Holly is no stranger to I’m A Celebrity. She stepped in for host Ant McPartlin as he tackled his demons and took time out from the show.

But could she be stepping in front of the camera and heading onto the show this time around?

What has Holly said about her time off?

Earlier today, Holly posted to Instagram to thank Josie Gibson for standing in for her at the last minute.

Alongside a picture of Josie, she penned: “Thank you @josiegibson85 for saving the day yesterday… you are a dream!

“I’ll be back as soon as I’m in no threat of vomiting on @schofe.”

And, in news that’ll disappoint those hoping she’s heading into the castle, Phil also revealed that Holly is likely to be back on air tomorrow.

“I was texting Holly all afternoon yesterday and it’s a tummy bug.

“It’s a two day thing and she’s lost her appetite,” he said.

Head to our Facebook page @EntertainmentDailyFix and tell us what you think of the fan theory.