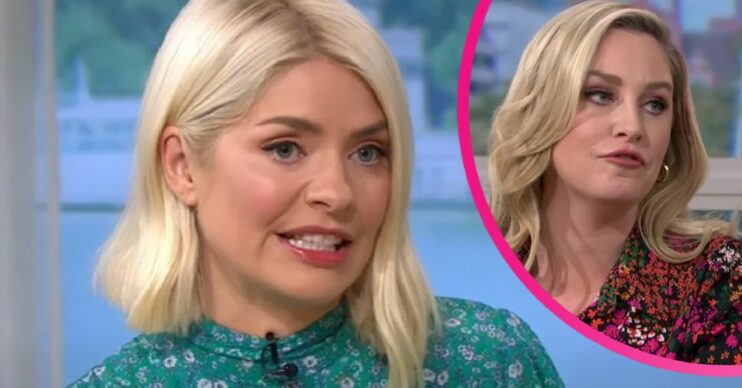 This Morning: Holly Willoughby replaced for a second day as Josie Gibson takes over

The presenter is battling a nasty stomach bug

This Morning host Holly Willoughby has been replaced for a second day after falling unwell.

The 40-year-old presenter is battling a stomach bug, forcing Josie Gibson to host alongside Phillip Schofield.

But as Holly was notably missing from the show on Wednesday, Josie thanked viewers for their kind messages on her debut yesterday.

This Morning: Holly Willoughby replaced for a second day

Josie joined Phillip in the ITV studio at the start of the programme today.

Phil said: “Look who is back! We had a massive response and everyone loved you.”

Josie responded: “Social media can be a dark place sometimes, but yesterday I was showered with love.

“It was a really big thing to be sat here with you yesterday.

“And to have all those lovely messages.”

Phillip seemingly went on to confirm Holly’s return to the show.

The host said: “I was texting Holly all afternoon yesterday and it’s a tummy bug.

“It’s a two day thing and she’s lost her appetite.”

Ahead of today’s show, Holly took to social media to update fans on her illness.

Alongside a picture of Josie, she penned: “Thank you @josiegibson85 for saving the day yesterday… you are a dream!

“I’ll be back as soon as I’m in no threat of vomiting on @scofe.”

At the start of Tuesday’s show, Phillip and Josie explained why Holly wasn’t on the programme.

Phil said: “Welcome to your Tuesday This Morning. About an hour ago, you [Josie] were on your way to do our live competition in Surrey.

“Holly is not here today because she has a tummy bug. She’ll probably be back in tomorrow.”

Josie said she’s been “thrown in the deep end” but was looking forward to doing the show.

However, the host went down a treat with viewers.

“Can we keep Josie presenting This Morning, Josie is brill,” one said, while another commented: “Liking Josie already. A natural.”