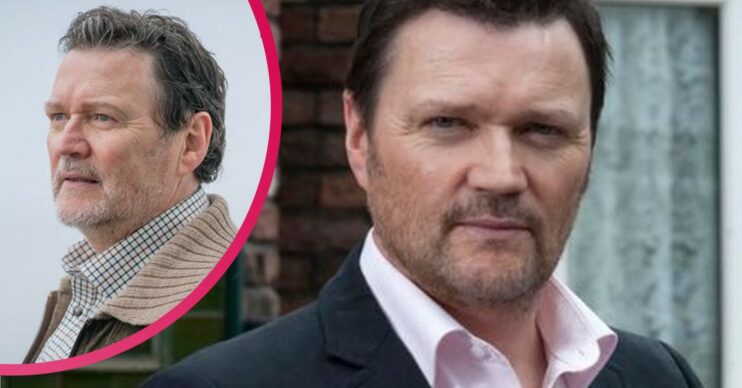 The Teacher on C5: Who did Ian Puleston-Davies play in Coronation Street and why did he leave?

The Teacher starts on Channel 5 this week and it features an all-star cast including former Coronation Street actor Ian Puleston-Davies.

But who did he play in the ITV1 soap, and why did he leave?

And what has he starred in since?

Here’s everything you need to know about Ian Puleston-Davies.

Read more: The Teacher on C5: What’s it about, how many episode is it and is it a true story?

Who plays Brian in The Teacher on Channel 5?

Ian Puleston-Davies portrays Brian in The Teacher on Channel 5.

What do we know about Ian’s character?

Very little at the moment.

Which makes us think he could be a villain…

We do know that Brian is the new man in Pauline’s life, played by Cecilia Noble in the cast.

Pauline is one of Jenna’s colleagues and her closest ally at the school.

Teacher Jenna (Sheridan Smith) is accused of having sex with a student, and her world crashes down around her.

Meanwhile, Pauline has her own problems as she wants Brian to move in with her.

But, when she suggests it, he becomes distant.

More clues that he’s one to watch!

Could he be behind the malicious emails being sent to the school about Jenna?

Or are we just too suspicious…?

Ian Puleston-Davies Coronation Street – what else has he been in?

Soap fans will know Ian from his role in Corrie, but he’s been acting for nearly four decades.

Who did Ian play in Coronation Street and why did he leave?

Of course, soap fans will know Ian Puleston-Davies from his role as builder Owen Armstrong in Corrie.

During his time on the show, Owen became the new landlord of Weatherfield’s Rovers’ Return.

He also tried to build a father-daughter relationship with both of his daughters Izzy and Katy.

In the soap, he was also caught in a love triangle between Liz McDonald and Eileen Grimshaw before eventually choosing landlady Liz.

Owen historically had a feud with Izzy’s boyfriend Gary Windass, and formed a relationship with Gary’s mother Anna.

He went into business with the now infamous Pat Phelan, who ended up conning Owen out of his £80,000 investment.

In November 2014, Ian Puleston-Davies announced he had quit the series.

His character eventually left the series on April 15 2015 when his relationship with Anna ended for good.

Realising he didn’t want to live in Weatherfield without her, he decided to go and live in Aberdeen.

How old is Ian Puleston-Davies and where is he from?

Ian Puleston-Davies was born on September 06 1958 in Flint, Flintshire, Wales.

He is currently 63 years of age.

Ian Puleston-Davies wife – is he married?

Actor Ian Puleston-Davies is not married, but he is in a long-term relationship with partner Sue MacPherson.

The pair currently live in Chester with their two children, Maggie and Charlie.

Ian has said he is determined not to pass his OCD on to the couple’s children.

Ian is a strong advocate for mental health following his own battles with OCD, which he has spoken openly about.

Ian has spoken at length about his personal struggles with Obsessive Compulsive Disorder, including making a documentary for BBC Wales in 2017.

He has suffered from Obsessive Compulsive Disorder since childhood.

His condition can be so severe, that he had to go through a mental checklist to help him cope before he set foot in the Rovers.

He said at the time: “I worry I’m going to cut my lip or chip my teeth on the glass, so that damn pint glass in the Rovers is always going to leave me susceptible to an OCD attack.

“I have to check the lip of the glass with my finger first to make sure that it’s not chipped and then practise taking a sip and a swallow before we even rehearse.

“If I waited until we began filming, my OCD – my little evil voice in my head – would say ‘it’s stained’ or ‘you’ve just chipped your teeth’.”

He has also admitted he prefers to eat on his own because of his OCD, and is worried about sitting down, because he fears he’ll crack his coccyx.

Ian used his own battle with OCD in a production in 2005 titled Dirty Filthy Love.