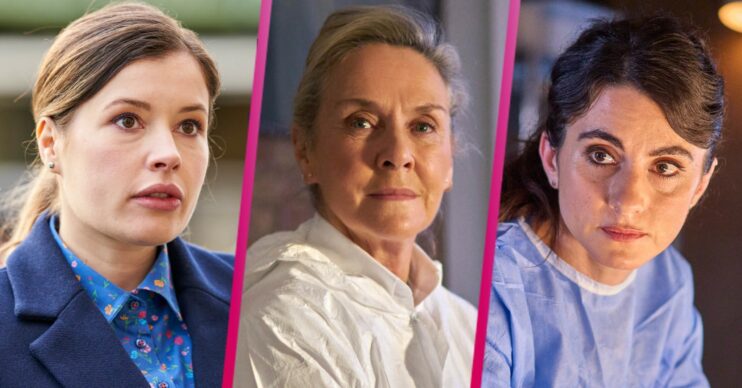 Silent Witness series 25 episode 5 and 6 cast: Who stars in the final instalments?

The final two episodes bring the tense drama to a conclusion...

Silent Witness series 25 comes to a dramatic conclusion this week with episodes 5 and 6 – so who is in the cast?

The climatic finale finally reveals the truth behind the brutal murder of Health Secretary Alice Reynolds.

But why, and by who?

Here’s a look at the impressive cast in episodes 5 and 6 of Silent Witness series 25.

In part 5 of 6 of the 25th anniversary series, the death of an investigative journalist throws the spotlight onto the increasingly suspicious Sam Ryan.

The professor was at the scene of the crime and had reason to want to see the journalist dead.

Could Sam Ryan be a wrong’un?

Nikki begins to realise the implications of her discoveries – manipulated blood samples – will challenge the principles of forensic science.

In the final episode of Silent Witness series 25, the Lyell team confront threats to the credibility of DNA itself…

In the 25th anniversary series of Silent Witness, Amanda returned as Sam Ryan for the first time since 2004.

The professor called the Lyell team for help after the assassination of Health Secretary Alice Reynolds and the attempted murder of Sam Ryan’s husband and business partner, Jomo Mashaba.

But Sam’s behaviour has been shady at best.

She’s not telling Nikki everything, and she even stole an important sample from Lyell behind Nikki’s back…

All will become clear in episodes 5 and 6 of Silent Witness series 25.

Amanda, now 65, is known for her roles as Heather Huntington in Brookside, Dr. Beth Glover in Peak Practice, and Commander Clare Blake in The Commander.

She played Charles Bronson’s mum Eira Peterson in the Tom Hardy film in 2008.

His character, the husband of Sam Ryan, was shot in the first episode of the series.

Hugh’s character Ric was caught up in many explosive storylines including getting caught up in shootings, separating conjoined twins, having five on-screen marriages and even being accused of manslaughter.

The actor has been on our TV screens since 1979, when he first appeared in the TV film The Knowledge as Campion.

He’s since appeared in TV series including The Tomorrow People, Medics, She’s Out, and White Heat.

Vera viewers will know David Leon from his role as DS Joe Ashworth, a role he played from 2011 to 2014.

Since then, he’s played Álex in The Refugees, DI Adam Perrin in In the Dark, and Kieran in Gold Digger.

David, 41, has also directed and produced a number of films.

Following his time on Vera, the actor started production on the TV miniseries, Orthodox.

The Netflix series follows three Hasidic Jews as they attempt to leave their ultra-Orthodox community.

Soap fans will know Ian from his role as builder Owen Armstrong in Corrie, but he’s been acting for nearly four decades.

Earlier this year, 63-year-old Ian was sinister as hell in the drama The Teacher, before playing Supt Ross Beardsmore in DI Ray.

In a bizarre coincidence, Ian has appeared in Silent Witness before – but as another character.

He played DI Philip Mays in the 2007 episodes Peripheral Vision: Part 1 and Part 2.

Elsewhere, Matthew Gravelle stars as the pivotal character Tom Faulkner, who appears to have been set up for the murders.

His DNA and a partial fingerprint were found on a cartridge case located in the snipers’ hide, making him the number one suspect for the murder of Alice Reynolds and the attempted murder of Sam Ryan’s husband Jomo Mashaba.

Tom served as Sam’s unofficial security detail in Stockholm back in 2018 when she was working for the UN.

Broadchurch fans will recognise actor Matthew as creepy villain Joe Miller, who murdered Danny Latimer in series one of the show.

In a sinister twist, Joe was the husband of Ellie Miller, Olivia Colman’s policewoman character.

Since then, actor Matthew has starred as Terry Price in Keeping Faith, Joshua Peake in The Widow, and Gwyn in Curious Under the Stars.

Matthew has also appeared as Ivor Griffiths in The Snow Spider, Saul Tregarron in Exile, and DI Nathan Eason in Manhunt.

The Welsh actor, 45, also starred in Doctor Who, Living a Lie, and Ordinary Lies.

Aimée is perhaps best known for her debut leading role in the 2011 feature film Sket.

She also led the cast of CBBC’s hit drama Wolfblood as Maddy Smith between 2012 and 2013.

Aimée has popped up in episodes of Call the Midwife, Doctors, Holby City, and Grantchester.

She played Emily in the brilliant 2019 film The Personal History of David Copperfield, and Irene Boslover in The Duke.

Her next role will be as Elise Larkin in the much anticipated This Sceptred Isle, starring Kenneth Branagh as Boris Johnson.

Aimée can also be seen in the music video to Ella Henderson’s single Brave.

Before that, she popped up in episodes of Doctors, Vera, The A Word, Waterloo Road, and The Royal Today.

Who else is in the cast of Silent Witness series 25 episodes 5 and 6?

David Caves reprises his role as Jack Hodgson, opposite Genesis Lynea as Simone Tyler, who joined the cast in series 24.